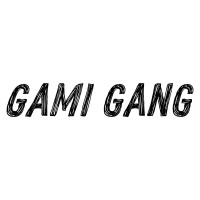 One got the sense with Origami Angel’s debut LP Somewhere City--which darted flippantly between Top 40-worthy melodies and disquieting unorthodoxy--that something rare and special was afoot. With equal parts Cap’n Jazz, Day at the Fair, and Q And Not U, its dizzying command of both form and content was little short of a jawdropper.

But where would an accessible band already so dexterous in the avante garde ab initio progress? Would the gravitational pull beckon them further down the rabbithole of quirkiness and experimentation or more toward mainstream palatability?

Astonishingly, the answer seems to be “neither.” On Gami Gang, the band’s second full-length, they sacrifice neither their accessibility nor the constant reminders that their music is far from ordinary. But that’s not to say it’s simply part two of what already worked on their debut.

For one, Gami Gang is ambitious; a double LP in an era of digital singles and TikTok soundbytes. On Somewhere City Origami Angel proved they could craft a thematically cohesive whole that’s dually sincere and sportive--the musical manifestation of a drummer who reps both Bane and Reel Big Fish apparel in promo photos.

That artful admixture’s obvious in Gami Gang as well, with single “Neutrogena Spektor” leading the way. “Wouldn’t it be nice if I was easy on the eyes?” it asks, before offering the self-affirming retort: “Honestly I couldn’t give a fuck and I feel fine.”

The bouncy pop-punk ”Blanket Statement” is no less acerbic, opening casually with “I keep my room just like my life/A fucking mess and out of sight, with the curtains closed to block out any light.”

Every time the band seems like they might slip into radio-ready pop rock--like the programmed intro to “Footloose Cannonball Brothers,” which nods to Hellogoodbye at best and Owl City at worst--they pivot to something unexpected, in this case extending and decelerating the chorus with the kind of musical intentionality that would suggest a Berklee-educated producer was calling the shots.

But it’s the band’s own intuition that impresses throughout Gami Gang. Who knew a Young Chop-inspired trap intro could lead seamlessly into a heavy, breakdown-laden emo pop crooner? Evidently Origami Angel, who recorded the entire album in frontman Ryland Heagy’s bedroom before sending it off to Honest Face Records’ Jake Checkoway for mixing and mastering.

Clocking in at nearly an hour, the double album follows precedents by Sandinista! and the White Album in checking requisite boxes for variety and eclecticism on extra-longplays. “Bossa Nova Corps” embraces its stylistic namesake, “[spoons rattling]” toys with folk before transitioning to screamo, "You Won't" successfully exploits glee club harmonies, while “Dr. Fondoom” barrels through the gate with EpiFat skatepunk gusto.

There aren’t many lulls. A cleaned up and rerecorded “Greenbelt Station” from the previous year’s Minecraft EP is the only extended hush moment, which is fine. The band is at their best with ripping pop-punk numbers like “Mach Bike” and singalong headnodder “Caught in the Moment.” And there’s no shortage of such tunes.

If Somewhere City was a gamechanger, Gami Gang is an undefeated season, a nearly perfect balance of seemingly irreconcilable dialectics. Its heartstraining sincerity plays off wry moments of levity while effortless melodies rise above mindmelting musicianship and heady compositions. It may be an April release, but it’s gonna be a Gami Gang summer.