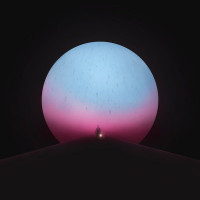 Manchester Orchestra have always been one of those bands, to me, that you just sit back and wait on. It doesn't matter what tracks are released up front, what videos are out, what interviews say -- the records speak for themselves. It's something that I stick to for not too many bands (Thursday, Jimmy Eat World come to mind), because I usually want to temper my expectations. But led by vocalist/writer/guitarist Andy Hull, this is an act that you let take the wheels, knowing no matter what roads they drive you down, it'll be an emotional journey that'll have your head spinning. And true to form, The Million Masks of Gods is another haunting yet blissful magical gem that puts them in a category of their own.

Now, preface this with something I experienced in 2019 at my last Riot Fest before the pandemic hit. When Andy and Co. banged out "The River," I noticed my bud next to me, front and center in the pit, losing his mind. He was singing along, and to this day, it's the best live experience I've had. A year before we caught them with Tigers Jaw and Foxing, and after that -- his first time hearing them -- he couldn't stop listening. So that was pretty special for me, a proud father if you will, which encapsulates the inviting aura of the band. For any genre of rock and roll, they have something, even if it's out your wheel box, and I love that the 100% of people I've introduced to M.O. fall absolutely head over heels in love.

I spoke to Andy on the record and kept pressing about going back to the old-school sound, but again, that ship sailed. They're into new frontiers, experimentation and, well, the things that comes with getting older as husbands, fathers and that sort of stuff. That's what art is, right? Ageing. And in their case, it's like fine wine, which is why the array of orchestral songs that I'd usually think would close the record are something even more powerful to soak in on this record. It's like they stripped down "Colly Strings" and then decided to veer off into a sonic Multiverse using just that spine.

"Angel of Death" best sums it up, which as Andy said, is all open to interpretation. Love, life, fatherhood, family, religion, etc. -- it's on you. Make what you want with it, and the fact there's the young girl narrating the album at key intervals adds to this ethereal and fluid feel. It also reflects a lot of the signature (of lack thereof) of this album, with tracks like "Bed Head" coming off like Silversun Pickups. Again, it's not something to be shocked at as Simple Math and A Black Mile to the Surface already pushed us in this direction, per "The Gold" or "The Moth". But here, it's a lot more of that soft-loud dynamic, that visceral arrangement on the buildups and honestly, a lot more of Andy's iconic poetry. It's not surprising given he's doing more scoring on film, and that the band's exploring guest spots with the likes of Max Bemis, Touche Amore and userX.

It frees them even more creatively, and I love the growth shown. Even on the mesmerising videos they keep drumming up, you can tell they haven't hit their artistic peak and are fiddling with producing that creative oxygen we've been deprive of. It's burnished on the funk-driven "Keel Timing", calm ballads like "The Telepath" or "Let It Storm", or anthemic rushes like "Dinosaur" and "The Internet". These are all tracks that have such a symphonic ebb and flow to them, and which I think would be so moving in acoustic caves, theatres or from the home studio.

It's admittedly a sucky notion as I'd love to hear this live -- there's just a shaking heft to how patient, restrained and worn these songs are, and it's a reason why I can see Netflix series taking on more of the tracks. It's heart and soul to test people and get them dissecting what they're made of. More so, it speaks to people from all walks of life, and what I adore is there's an subtle intonation and melody that's common to everything ("Keel Timing" to "Bed Head"). This helps disconnect and drown people in their own worlds and makes me wonder what next will come.

Most of the record was done before COVID-19 and addressed the death of guitarist and co-mastermind, Robert McDowell's dad, so I'm eager to hear what other stories will come from a time that's been equally trying. But as this album reveals, as dark as things get, life should be coated with optimism. And given that M.O. are getting more cinematic by the release, whether it's a more mainstream sound, poppy take or a "sell-out" style, I'm all in.

The Mighty Mighty Bosstones: When God Was Great