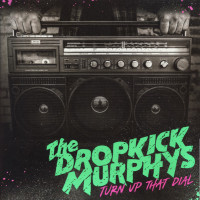 Dropkick Murphys are a pillar of the punk scene, and have been for a couple decades. That point is not up for debate. Their first few albums are cornerstones of the celt-punk subgenre. While that style is not as popular as it once was, the Boston band still has a huge following. In other words, in the greater punk context, Dropkick Murphys still matter. Unlike many of their peers who have reached a similar level of success, DKM are still hungry enough to make a record every couple of years.

Turn Up That Dial is the band’s 10th proper studio album, and 5th since leaving Hellcat for their own Born & Bred imprint. When you throw in EPs, splits and live albums, Dropkick Murphys have over 80 releases. There were bound to be diminishing returns at some point, even if it seems to have gotten worse in recent years. Every later DKM album had a great song or two, but they struggled to capture the magic of those first five full lengths. Turn Up That Dial makes a genuine effort to tap into the early rebellious spirit of the band.

The title track starts things off and sets the stage with its really great, sincere refrain. “We took on the world/With these songs in our ear/They told us to listen/But you were all we could hear/You were our sound/You were angry, loud and raw/They wrote the rules/But you were the law”. It’s the first of a trio of really solid punk songs. “Middle Finger” is slightly more bone-headed, but shares a similar sentiment. Ditto the extremely catchy “Smash Shit Up”. “Chosen Few” is the rare level-headed political song.

“Queen of Suffolk County”, “City By the Sea”, and album closing ballad “I Wish You Were Here” are all vintage Murphys. They’re the types of songs that put Boston at the center of the known universe. The best track on Turn Up That Dial might be buried toward the end. “Good As Gold” will get stuck in your head for days. The best songs here don’t skimp on the distorted electric guitars. They let the traditional instruments find space around them, instead of vice versa. There are a few filler tracks, but less than on the last couple of albums. Even the worst songs seem more inspired and less forced than in recent memory.

The bottom line? This is a slight return to form for Dropkick Murphys. It’s probably not going to occupy the same place in your heart as Do Or Die or Sing Loud, Sing Proud, but you can’t expect 50 year old guys to make the same record they made at 25. Give Turn Up That Dial a listen. You might just be pleasantly surprised.

The Mighty Mighty Bosstones: When God Was Great