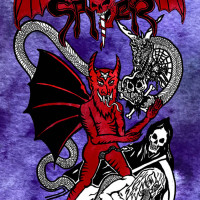 Obfuscation as art is the name of the game for Spiter. The brand new Philly band worship black metal on high and use that genre’s hallmarks- distanced, reverb sound- to create an ambiguous sound of evil. It is spooky.

The band’s debut Draconian Death Curse seems to be somewhat self-aware. Sure, some black metal and death metal bands want you to believe that they really do spend all day creeping around the forest in corpse paint drinking blood. And sure, this band has learned their instrumental lessons well and this is some very fine punk-metal. The distortion and reverb is all Scandinavian, but the riffs are sharp and hooky enough that there is some good ol’ USA punk pedigree here, and that really makes the release bang.

But, by the virtue of the EP’s name, and their retro-video debut for “I am Dracula,” the band pulls a sly maneuver. That is, yeah, they know that you know that they’re not actually leaping out of the shadows and drinking virgin blood, but... so what- the artifice itself is fun, and arguably there’s a universal statement in there somewhere.*

That is, most of the lyrics focus on death and destruction… well, on one hand, that is. “Kill for Satan” goes “kill, kill for satan / dominate / kill for satan / annihilate / kill for satan / carve your fate.” “Die Now” has “lower you down / under the ground / forever to remain / no sight no sound.” And sure, they’re having fun reveling in horror metal landmarks. (I also like Dracula howling “blaaarggggh!” in the background of “I am Dracula.”

But on the other hand, for every salute to death, the band also looks towards immortality. “Cursed eternal” starts off with “this curse is eternal / reborn undead and nocturnal.” “I am Drac” has “for when you enter herein / you are possessed by immortal gloom.” The band really likes vampires. But, what does that fixation suggest? You could say they just like destroying things like the metal-punkers they are… or if you wanted to put on your amateur Freud cap, you could say they are actually terrified of destruction and are flirting with the idea that maybe they don’t have to turn to ash. Is it all b-movie fun… or is there more to it, here? It seems to me that they’re hiding their true message right in the foreground. Or, if I may, I'll speak a form that Spiter can understand- Listen to them, the children of the night. What music they make! .

*I’ll also add that it’s not like Brian Wilson or whomever is always looking up at the moon and wondering about the melancholy perplexities of life, either. Sometimes he’s probably just watching Urkel.

Dropkick Murphys: Turn Up That Dial