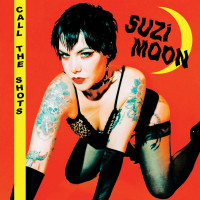 Apparently, despite my ignorance, Moon (or Suzi Homewrecker) has been bouncing around the scene for quite a while now. Since she was 15, in fact. She started out with her sister’s band Civet, before moving on to Turbulent Hearts, and then L.A. Machina. She toured the world with Social Distortion, Flogging Molly and Dropkick Murphys before she was 21. Call the Shots is a culmination of her work. It’s a killer blend of Joan Jett and The Stooges. It’s great riffs, ample amounts of attitude, and just enough raw sexuality.

“Special Place In Hell” kicks off the brief, three song recording. It’s got a hook worthy of arena rock, but about ten times as much attitude. A line from “I’m Not A Man” gives the EP its title. It’s got a strong “Raw Power” vibe, right down to the pounding piano, and, you guessed it, even more attitude. This could easily become Moon’s signature song. “Nuthin’ To Me” taunts an ex-lover about what he’s missing with a Dead Boys like punk and roll swagger. Each song is catchier than the last.

It’s funny - punk rock has become fairly puritanical, again, over the last few years. Part of it is no doubt a reaction to the large amount of “punk” musicians being exposed as creeps. Suzi Moon definitely takes the sexual power back, and I’m sure as hell not going to be the one to argue with her. It’s good to shake things up. Punk is supposed to be provocative. Consider me provoked! My only issue with Call the Shots is that there’s not more of it.