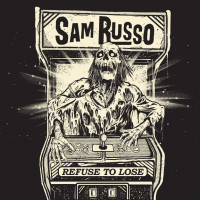 At a time when many punk rock bands have been leaning towards acoustic releases, mainly due to a covid-related necessity, Sam Russo does just the opposite. Last year, he released his third full-length full of haunting ballads and acoustic observations, albeit with a ton of punk rock aesthetic. And after a year of no touring, no shows, and very little PR, he has decided to release Refuse to Lose, an EP featuring full-band renditions of three tracks from last year’s Back to the Party, with a little help from his friends Chris Stocking, Garth Vickers, and Dan Andriano of Alkaline Trio.

Compared to the original versions, the structure of each song generally remains the same, as does a lot of the guitar work. But the bass and drums obviously add somewhat of a different energy to the tracks. For example, the syncopated rhythm and added depth of the bass at the beginning of “The Basement” offers somewhat of an eerie, anxious feel to the song, though overall the song remains intact. This is generally true of the other two tracks as well.

While the original acoustic versions somehow exude heaps of punk rock energy, the full band versions amplify this energy at just the right moments, for example during the chorus of each tune. And other subtle enhancements provide a little more texture, like the change in tone/volume of the octave melodies during “Young Heroes” and the more prominent, dizzying guitar picking heard on “The Basement”. Despite all of this though, the contradiction of delicacy and gruff luster is not lost with the addition of more instruments. The songs remain heartfelt and steadfast, partially because of the passionate, wavery, and dynamic vocal delivery.

At the moment, this is only available digitally. But this release definitely deserves a vinyl edition. These “new” songs are not better, nor worse. And weirdly, they are not all that different, nor are they the same as the original versions. I’ll say it again as I said in last year’s review: Sam Russo songs are full of contradictions. I also wrote in last year’s review that it seems like he “writes punk songs that were never intended to be played on an acoustic guitar” and that the album was “an acoustic record that feels punk.” And now, these reworked tracks provide a little more justification to statements like this. It could be argued that the songs are meant to be punk rock songs, whatever that means.

Beatnik Termites: Sweatin' to the Termites