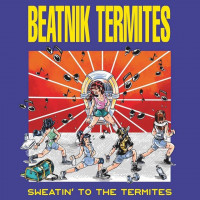 It has been 18 years since the Beatnik Termites released a proper full length album. Let me get this out of the way and say it has definitely been worth the wait.  If you are unfamiliar, Ohio's Beatnik Termites have been releasing their own brand of surf inspired pop punk since the 90s. Their debut "Taste The Sand" is one of the era's defining albums when it comes to pop punk and Ramonescore. Lead vocalist/guitarist Pat Termite is back with a new lineup to deliver sugary sweet pop punk that borrows from surf punk to doo wop, and everything in between.

The album opens with doo wop backing vocals on "Pet Shop Girl" that sets the tone well for this album. Solid vocal harmonies are present throughout this track. The Termites get back to straight forward rocking on "Denise Marie" which follows. This will appeal to fans of classic era Termites. "She's Gonna Kill Me" shows a more aggressive side to the band. The Termites take on a faster Ramones influenced approach with solid guitar riffing. They use a strategically placed chord change towards the end which really enhances the track. Guitarist Chris Hubbard takes over lead vocal duties on "Out Of My League" which is a take on classic 50's Americana. "Closer To You" boasts buzzsaw guitars and a catchy chorus. This track really showcases Pat Termite's vocal range. The standout track for me on this release is definitely "My Darling Mary Ann" which I have not gotten out of my head since first hearing the album. This tune has a surf rock beat throughout and is accompanied by some of the best vocal harmonizing heard on a pop punk album. The chorus is catchy as anything laid to tape by the Queers or Beach Boys. The classic golden oldie sound is back on "Rubber City Roller Girl" which follows. This surf rocker boasts some amazing drum beats and a moving baseline on top of layered vocals. "Summer Summer" showcases some high pitched Beach Boys vocal deliveries throughout. This steady rocker has solid backing vocals to carry the track. The Termites tell a classic pop punk love story through "Tell Me Why" which is present with hooks and melodies. "Kennywood" is my second favorite track. This could have easily been a 90s alt rock radio hit. This mid-paced rocker tells the story of remembering a roller coaster ride with a specific girl. Doo wop is back on "Kiss You" which showcases extremely audible vocals of Pat Termite. Straight forward rocking comes back around on "Pretty Baby." The album concludes with the extremely fun "Teardrops and Lollipops." This bouncy number is classic Beatnik Termites through and through. The chorus goes into a very clever guitar lead. This is a great conclusion to a solid album.

It has been a long time coming for Termites fans to have new material from the band.  The timing could not be any better as there has definitely been a resurgence in demand for classic 90's style pop punk. What is great to hear is that the band did not simply make "Part 2" of any of their previous albums.  Instead they built on their classic sound and added some amazing vocal and instrumental harmonies that stay in your head for days.  It should also be noted that the production is extremely stellar with all vocals clear and audible. The Termites should expect to bring back old fans while attracting new ones with this release.

Fiddlehead: Between The Richness