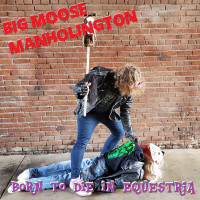 At this point, its war by attrition for Big Moose Manholington. If you don’t know by now, the band is composed of a bunch of grown men that love My Little Pony that also love the Ramones. So, what they do is sing about My Little Ponies to a rudimentary Ramonescore beat. The, uh, issue is that, for the most part these lyrics are disturbed, twisted, and just downright wrong. Born to Die in Equestria, their umpteenth release not only shows no sign of the band relenting on this demented mission, but now they are getting even more frantic.

The songs are still pretty poorly recorded and sound like they were tracked on a boombox. The riffs, if you can call them that, are clearly jacked from the Ramones, though the playing isn’t as tight. And on top of that, they still are sexually obsessed with cartoons. Six songs here have “clop” in the title. (FYI, “clop” means beating off to My Little Ponies). Another song has an even more messed up title that I won’t write here.

But, despite the band following their usually course, they seem bizarrely… rejuvenated. They’ve taken their fair share of beating around the internet for obvious reasons. But, instead of retreating or second-guessing themselves, the criticism has seemed to charge them up. The lyrics are more explicit than before. Most of these songs are just about whacking it. One song does shout out the themed pop-punk band the Jasons, though one wonders of the Jasons are welcome to the reference. But, aside from that, this is a band that revels in a sick level of crassness.

Even moreso, the band seems revved up musically. In addition to the standard Ramonescore, they toss in a Queen homage there, a Beach Boy harmony over there, and kick it to GG Allin over yonder. That is, this band sounds like they are having more fun than ever in their sick world.

So, that begs the question- if the band has taken a number of hits over the past two years, and they seem to be even MORE charged than before, what does that mean? Even Punknews’ commentary on the band is referenced on “Murder at the Brony House.” Does this suggest that the band DOESN’T want acclaim? Is domination or humiliation the real point of this music? And if it is, what does that mean that we are PARTICIPATING in it simply by engaging with it? You’ll have a tough time finding “music” more tangled than this.

Fiddlehead: Between The Richness