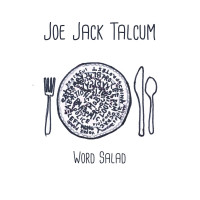 This and That Tapes

Joe Jack talcum has DOZENS of limited release and long forgotten tapes and Word Salad might be one of his most interesting ones. When playing solo, Joe usually likes to revert to his folk personae, which was the earliest form of music that he played- and even then, his folk music often has a warped sense of humor hidden in there somewhere. But, that being said, while Word Salad is built off a base of Joe-folk, where he usually nods to Woodie Guthrie or Tom Lehrer, here, he looks more towards the dark side of early Pink Floyd or The Pink Fairies.

“Not Dumb/Bubbles” starts off with Joe’s usual twang, before dissolving into a computerized space trip. He talks about the world being on fire while he’s trapped in a cubicle while a cold wave synth washes in the background. It’s at once funny, sad, and cold. Yet, despite these nuanced emotions, it never feels like Joe is “trying” to put on a show. Rather, it’s as if he’s just speaking earnestly, and this trippy, dark world is what spills out. We often think of Joe in the context of the happy “punk rock girl,” but Joe-from-dark-regions is equally, if not more, powerful.

Yet, whereas less artful hands would revel in the blackness, just as Joe pulls this darkscape out front, he then flips to a genuine, gentle love song, “Puzzle piece.” “You’re my missing puzzle piece,” he calls out. It’s a simple, yet powerful phrase. One wonders how this metaphor has never been used before and therein lies the musical genius of Joe. He’s distanced and abstract only to revert to stating a simple truth that we can all feel.

It’s also quite thrilling when Joe engages in sonic experiments. “Beautiful War” has two computers talking to each other while Joe puts sci-fi bleeps in the background. It’s more a soundscape than a “song,” and finds Joe abandoning the classic 150 second confine while traveling to warp-space. One is reminded of the 10-minute b-sides to McCartney II- “Check my machine” and “all you horse riders.” Joe often engages in the quiet and simple, but when he gets sonically artsy-fartsy, the results are astounding.

Perhaps surprisingly, the album ends with Joe in full on political attack. He borrows a line from NWA while a compu-voice reads off the list of POCs killed by violence. Joe has always been political, but never so directly. Is that a statement on Joe's transformation or a statement of the times?

“Word Salad” is low key by design, so it’s striking out how fully formed and effective it is. One doesn’t get the impression that Joe really cares about fame, or even accolades, but that doesn’t stop one from hoping that Joe will really swing for it and go big scale with a full-on sci-fi, star-trip, mind-freak record. That is to say, my God, the Joe Jack catalogue is full of stars and it seems like we’ve seen just a tiny fraction of them. Highly recommended.