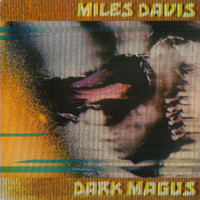 It’s March 30, 1974 and Carnegie Hall is filling up with twenty and thirty something members of the counter culture alongside high-brow jazz fans to see Miles Davis and his band perform. While the older generation hoped to hear tracks from Davis’ cool jazz period, the younger crowd hopes to hear something more akin to the music found on Bitches Brew, released four year prior. It’s safe to say none of them anticipated what they would hear that night, it is even less likely they recognized how far outside of jazz the music captured that night, and later released as Dark Magus, would likely extend.

It had been four years since the death of Jimi Hendrix, The Stooges had released Raw Power a year prior, and Funkadelic was in the middle of a run of classic albums filled with loud, discordant, and funky music. Miles Davis was about to record something, that took in all of that and spit it back out to remind everyone what being born again sounded like. Davis arrived nearly an hour late, walked on stage while the band was still setting up, and began to play without hesitation. The rest of the band would join him. They did this with little to no rehearsal beforehand; the show was an audition for tenor sax player Azar Lawrence and guitarist Dominique Gaumont. What followed was loud organized chaos that always stood on the verge of completely falling apart. Somehow it didn’t.

The freedom of these sessions, which relied heavily on improvisation, can be heard throughout. Most of the rules associated with traditional jazz and improvisation, the circle of fifths for all of you music theory folk out there, were only loosely adhered to. This album was, essentially, musical anarchy. Davis replaced his keyboardist with three guitar players. Davis would stop and start the band at the drop of a hat, and anyone on stage could be asked to step up and fill this space at any given time. Without hesitation almost every member of the band would step up to fill the role they were given.

Even with all of this, one has to wonder what does this have to do with punk rock. It didn’t have much to do with New York punk’s first wave. There’s nothing in the Ramones catalog like this. Five years later though, in response to the new wave scene gaining traction, bands generally called No Wave would come into existence. Some of the bands put under this umbrella, James Chance and The Contortions for example, would combine avant-garde funk, punk, and jazz in a manner that not many had heard at the time. But, all of those elements are on display here on tracks like “Moja” and “Nne”.

I would even go so far as to say what gets labeled as punk-jazz wouldn’t exist without this album. John Zorn’s career, likely, was influenced but this period of Davis’ career; if not this album specifically. It’s unlikely he would elements of grindcore present on Naked City without this. One can listen to the drum of Al Foster on this album and hear things that wouldn’t be out of place on recording by Dillinger Escape Plan, The Locust, or The Blood Brothers.

This isn’t an album that every punk fan is going to love or even enjoy. But, if you’ve ever found yourself diving into bands that incorporate elements of avant-garde noise, funk, or jazz into their sound this is an album for you. If you’re a fan of musicians who are aware of the expectations their audience have for them and say fuck that tonight you’re getting a rebirth live on stage, this album is for you. This is an album that was released, briefly, in Japan in 1977 (on Columbia's CBS International imprint). It would be another twenty years before the album would see a proper US release. And even now, closing in on half a century later, this album still sounds more innovative than some of the jazz, noise, funk, and perhaps even punk bands who emulate its sounds, perhaps without even knowing.