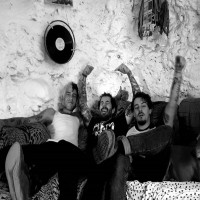 From Eric Clapton to Fidlar, the range of artists that have had a hit named after certain substances are vast. Once again, a power trio takes the artistic license to give it a new go. It's the case of the new band Cocaine, from Granada (Andalusia,Spain) that shares the joint custody of some of their members with the psychobilly band 'BillyMonkeys'.

When coming to garage and punk, in terms of style, it's hard to carve your own path but these three have managed to release a quite good preview of their first album with the b-side to their new single, called Song of Grave" - even if it was recorded in an actual cave. The ones responsible of this achievement are Möno Diznoize and Antonio Molina, who have captured the literal underground sound to make it an edgy tape.
Apart from this particular recording, they handled the recording of the tracks in a very unstable situation due to this years pandemic..

Being in this sheltered environment has been somewhat prolific for composing too. They have taken the risk of singing in English for the first time to reach a wider audience, though the preview is only at bandcamp.

The tracks themselves are being pulled in an unique direction: punk and surf. These rhythms are also characterized by subtle vocal inflections- always making sure the more punk strains are performed with genuine emotion as opposed to an affectation.

Do the sound of these tracks, this band appears to mean what they play, if only to provide some reassurance until we reach the grave.

Chris Gethard: Half My Life [Film]