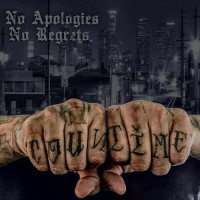 Countime has been working hard for nearly 20 years, not the least of it in 2021, when they’ve released a 5 song EP in February and followed it immediately with their new full length No Apologies No Regrets in May. Longtime followers of the band will notice a continuing decline in the amount of metal influence in their music. It’s of no concern though; these guys were meant to be a hardcore band, in the truest sense of the word.

Not that we’re talking about the best hardcore album of the year here, or even the month. But it’s also not the worst of either one.

One of my biggest issues here is the production, wherein the lead vocals are set 5 or 6 dB above everything else and kept there for the entire run time, something I’ve called out bands for in other reviews. I get that you never want to bury the vocals, and I get that this is a very hip-hop influenced mixing style in a very hip-hop adjacent genre. But it comes off as flat and it sounds like the voiceover on a radio commercial. Those guys in the back are working their asses off- let us hear them.

So as I climb back down from my pedestal, I will say that despite some production flaws and a few other hiccups, No Apologies No Regrets has its redeeming qualities. And in a reversal of norms for a so-so album, it gets better the deeper in it you go.

The booming “Drips” grabs attention as an ode to drugs- all of them, apparently- but at least it doesn’t come across as silly. Just unapologetic, as the album title implies. “Switched Up” is the anthesis of the sad breakup song, so much so that some may actually find it problematic. And for as much as Countime seems to hate them, they certainly devote plenty of valuable tape space to fakers (“No Time”), fakers (“Leva”), and even more fakers (“Fugazi”).

But as I said, it gets better. “Juzgarme” has the advantage of the entirely Spanish word flow at least sounding better than on most of the album, despite being structurally similar to several other songs. And “Bygones”, here a new version of an older non-album song, stands out with great gang vocals and the best writing of the set. There’s also a string of tracks that are classic 80’s American hardcore, taking a page straight from Victim In Pain (“Keep It Movin”, “No Turning Back”, “Slow Your Roll”).

There may not be anything on No Apologies No Regrets we haven’t heard before, and there’s plenty of opportunity to let the backline shine a little more. And given that thugcore is dismissed as petulant by some and only occasionally indulged as guilty pleasure by others, this record isn’t likely to change many minds. But for the casual fan, the high points are pretty high, and the lows aren’t all that bad.