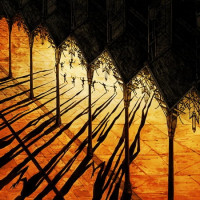 Perturbator is back with another round of dark synths and goth submergent in Lustful Sacraments, and the piece speaks for itself.

“Excess” rips open with quick cyber-punk drums and more narratives, before exploding into killer square leads and a chanted chorus. This song is killer, and leans perfectly against the head-bopper “Secret Devotion,” offering a more melodic approach from album guest True Body. “Death of the Soul” backpedals into the spookiest stems yet, bordering on the same fear-driven layers of early Nine Inch Nails, but with a sonic mix capable of challenging it to battle.

“The Other Place” picks up the shattered pieces left behind, firing into wide open goth-tar twang riffs and Carpenter grade key variation, ending, in perhaps the coolest part of the entire LP, after a complete fade out, the tune picks back up for one last violent reprise. This is faded seamlessly to “Dethroned Under a Funeral Haze,” a slow banger that stubbornly packs its bags and warns the listener that Lustful Sacraments is steering into the final lap.

That tail of the race, however, is being driven by the post-punk speed of “Messalina, Messalina,” and it is a fucking banger. The entire ballad rides on ambient words and break-neck drums, before a long rest, a spike in energy, and a standard Pertubator sparkle into the album’s closer. “God Says” slowly simmers until about 5:40, where proceeds to explode into a heavy outro and an aria from guest vocalist Hangman’s Chair.

In a bloated community of electronica, James “Perturbator” Kent is doing everything right, textbook even. Lustful Sacraments is plump with great writing, clever variation, and the necessary homage to hoist it well above the oversaturation. Super fun listen, would recommend.

Countime: No Apologies No Regrets

The Raging Nathans: Waste My Heart