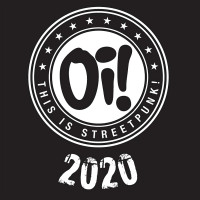 My last review of an oi album seemed to resonate with quite a few people, so here’s another overlooked gem from last year. This time it’s a double ten inch, a format rare enough that I only have one other example of it in my record collection. (It’s Joe Jackson’s classic 1979 debut Look Sharp!, for those of you keeping track at home.) Oi! This is Streetpunk! 2020 finds me descending even deeper into the oi rabbit hole. It features 20 of the best oi bands from across multiple eras playing 20 songs across 20 inches of vinyl.

The list of bands is basically a who’s who of worldwide streetpunk. The focus might seem to be on lesser known bands, at least to American audiences, but don’t let that scare you. The quality of the acts is consistently good across the board. Antagonizers ATL, Lion’s Law, Bonecrusher, Armada, Hard Evidence, 45 Adapters, and The Take are all band names that should be familiar to stateside streetpunk fans. .

Atlanta’s Antagonizers ATL start things off with “A Way of Life”, a song that was not on their stellar 2021 LP Kings. It has an early Dropkick Murphys vibe, and like every song on Kings, it’s killer. Austin’s Concrete Elite up the intensity a bit with “Unbreakable”, a song with some of the graveliest vocals I’ve heard recently. France’s Lion’s Law are similar, but their song is in French. “Un Jour” comes from their excellent 2020 album The Pain, The Blood and The Sword. Boston’s The Welch Boys take us on a dangerous but entertaining walk down the “Methadone Mile”. Orange County’s Boncrusher end side A with “Desperation”.

St. Louis’ Hard Evidence kick off side B with “A Natural Unnatural”. Brazilian band Armada (formerly Blind Pigs) chip in the defiant “The Rebel Sound”. The former Royal Hounds, now known as NY Hounds bring the vintage oi sounds with “I Don’t Like You Anymore”. Fellow New Yorkers 45 Adapters contribute “Friendship” from their excellent 2021 EP Now or Never. Paris’ Rebels Rule bring the glam and pub rock sounds with “Just a Memory”. It’s a fun song, even if style-wise it sticks out like a sore thumb.

Side C opens with the Netherlands’ The Young Ones doing the raucous “March of the Gutter Kids”. London old timers The Opposition contribute the classic sounding “Backstabber”. Paris’ Faction S leave us in the dark lyrically with the driving “Yous Complices”. Midwesterners Brassknuckle Boys deliver “Maryland Avenue”. It’s some crushing oi from the unlikely location of Lafayette, IN. The Take remind us that they’re one of the best in the game with their cover of Devo’s “Freedom of Choice”.

Chicago’s Spanish speaking Fuerza Bruta open side D with “Tarantula”. Long lost early ‘80s LA oi band Doug & the Slugz provide the catchy “Promised Us A Future”. The Prowlers are a French speaking band from Montreal. They contribute “La Flamme Brule”. The male/female vocals, catchy chorus and shredding lead guitar of Spain’s Falcata make “Viriathus” a highlight of Oi! This is Streetpunk! 2020. London’s Knock Off also wrap things up on a high note with the vintage sounding “You Won’t Change Us”.

Street punk and oi seem to have become largely the music of aging punks, and it’s a shame. The style really has a lot to offer punks of all ages. Oi! This is Streetpunk! 2020 does a nice job of showcasing the diversity within the sub-genre. There’s plenty of good stuff for the youngsters as well as dad, and maybe even grandpa. You know you need more oi (and ten inchers) in your life. Dig in!

The Raging Nathans: Waste My Heart