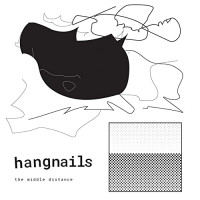 On their second EP The Middle Distance, Hangnails (were you guys trying to make me cringe every time I hear your name? Because if so, you’ve succeeded) explore the post-punk and indie rock of yesteryear as vehicles for modern blight. The band cites influences of Wipers, Wire, the Replacements, and the Minutemen, and fans of any/all of these shouldn’t be disappointed.

The title track’s offbeat smugness plays on the recurring themes of the whole set: being stuck exactly where we are, because that’s just how it is; don’t try to read any more into life because there’s nothing there. It’s not quite the indie rock anthem of our time, but it’s at least more accessible than most that get such credit. That’s not a particularly bad thing; it’s just that the song comes closest to a traditional rock structure on the whole set. The hodgepodge of influence from the aforementioned bands doesn’t let up on “Alienated Young Man”. But while you’ll find plenty of the angst of the Replacements and the jazzy arrangements of the Minutemen, what I hear more of on this one is a big dose of early REM, which is probably what draws me to this track the most. The lyrics may harbor the titular angry loner and his growing animosity towards, well, everything, but behind it is that shiny clap-along power pop that’s straight outta Athens.

On the back half we get “The Lucky Few”. The boredom here exists only within the context of the lyrics. An average man telling the tale of an average life, where nothing changes and then it’s over. He waits and waits for something to love, or even something to hate, just something to break up all the monotony, but he’s just not part of “The Lucky Few”, whoever that is. The verses ride on a sleek two-step guitar lick, bound airtight inside a rumbling bass cage, while the chorus changes it up with quirky phrasing atop a jangly riff. The point of no return comes on “Sell Me Sickness”, a crescendo of turmoil driven by more of that jazz infused post punk mess of fractured guitar chords and graceful bass guidance. Here the unappealing truth about life that we all come to know is laid out in front of us; as the shards of empty promises gradually fall away, and there’s no grown-ups around to put a stop to it.

Various Artists: Oi! This is Streetpunk! 2020

We Are The Union: Ordinary Life