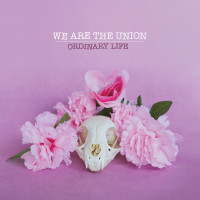 We Are The Union

One common thread in the discourse about the current ska revival is an insistence that ska’s third wave, and the mainstream associations it adopted, was not representative of the genre writ-large. The corniness encouraged by the more mainstream ends of that wave did a disservice to the genre undercutting its own socio-political history. Because of the genre’s retreat, forced by music writers with these associations in mind, it allowed for a new creativity to flourish that broke through the pigeonhole ska had been placed into with a burst of new releases to kick off this decade. These releases found influence in the genre’s past and an audience of contemporaries in the punk rock scene. Ironically, one of the bands that was keeping ska alive in those exiled times was We Are The Union. They’re string of albums around 2010 found wider appeal within punk circles.

After a half decade hiatus from their first go about it, We Are The Union returned, separating the two definitive eras of the band with their 2018 release Self Care. In it, the band started to move away from some of the defend pop-punk elements that headlined their previous albums. It also marked the addition of Jeremy Hunter of Skatune Network to the lineup, an invaluable addition to the lineup. They brought with them a deep appreciation and history of ska which has finally nudged out said pop-punk elements from We Are The Union. While Self Care saw a new era for the band, their latest effort Ordinary Life brings the band full circle and out the other end landing them promptly back in the genre’s third wave, but with a forward looking orientation.

Of the latest releases from Bad Operation, Kill Lincoln, and others gaining the genre new notoriety and fans, Ordinary Life sits as the most straight-forward call back to third wave influences. It’s easy to point to an album like No Doubt’s Return of Saturn on opening tracks “Pasadena” and “Morbid Obsessions.” The pop-rock tinged ska of a band like The Impossibles also comes through in “Short Circuit” or “Wasted.” “Broken Bone” and “Ordinary Life” would stand next to any of Goldfinger’s radio hits. Ordinary Life sounds like the ska album critics of the ‘ska-is-not-serious’ critique of the third wave ska would make to directly disprove it. And it works.

It would be hard to write this review and not write about Reade Walcott’s coming out as a trans woman as part of the album’s release, but rather than write a ska version of Transgender Dysphoria Blues, she uses the album to celebrate her identity. While the aforementioned Against Me! album addressed the struggle of body dysphoria directly, Walcott sings of a new found comfort with herself. “Boys Will Be Girls” is the most obvious example of this with its defiant chorus and righteous acceptance of the gender spectrum out in front. But it doesn’t stop there. Walcott addresses mental health challenges like ADHD, depression, and how they intertwined with her dysphoria. Relatable to anyone struggling with the interconnectedness of their mental health and their physical health.

“Diagnosis depression and dysphoria / When you’re alive but your friends and families mourning ya / But if my stubborn bones can grow anew on their own / Then we can change ourselves to build a better home,” sings Walcott on “Big River.” This type of celebration and acceptance of responsibility by the self to tend to your own needs first is triumphant throughout. Even when saying goodbye to a partner on “Short Circuit,” Walcott recognizes her “mind went manic and jumped over the details again” admitting in the closing of the song, “I can’t blame you for leaving / I can’t blame you before I short circuit again.” This is the radical self-acceptance of knowing you can always change and grow out of habits, or identities, that no longer suit your needs.

With ska poised for a contemporary breakthrough back into the mainstream conscience, Ordinary Life is a welcome landing spot for that breakthrough. It should be easy on the ears of any defensive fans of the third wave not willing to give up their checkerboard slip ons and right at home with those demanding a more thoughtful and inclusive alternative music scene in 2021.