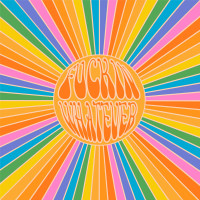 Anthony Green of Circa Survive, Adam Lazzara, and John Nolan of Taking Back Sunday, and Benjamin Homola of Grouplove have joined forces under the moniker Fuckin’ Whatever, and the result is a self-titled EP of psychedelic pop anthems.

The self-described “therapy group” has a longer history than any knee-jerk quarantine brain-children, but rather “a fluid project born of longtime friendships and late nights on the road,” and acoustic tour after-parties bleeding into tour bus recording sessions. This sense of hands-in unity oozes all over the release.

Fuckin’ Whatever eases open with the tribal beats and international instrumentation of “Trash,” firing off vocals from Green, Lazarra, and Nolan respectably. “I’m Waiting On You” brings the multiple vocalists ideology ten-fold, with long, dissonant verses and harmonies. The ballad ebbs and flows for over five satisfying minutes before fading as interestingly as it opened.

“Never Believe” pulls the tempo to a heavy stomp from percussionist Benjamin Homola, stacking another round-robin of rotating verses from the lineup. Previously released single “Original Sin” follows, with more locomotive rhythms, and a wall of vocal production nestled tightly around the entire composition. EP closer “I’m Not Afraid” is perhaps the most interesting of the five, as a metallic mix of vocal instrumentation and chugging drums continue to build like a machine that refuses to let up, all the while showcasing the vocalists’ limits in aggressive and gravelly delivery in an ultimately acapella outro.

Given the day jobs of the members of this supergroup, side-projects like Angels & Airwaves or Simple Creatures will certainly come into discussion, but there is something much grander and incredibly timeless going on here. Don’t let the humbled project name fool you, this is fantastic.

We Are The Union: Ordinary Life