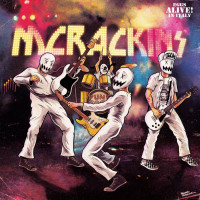 The McRackins have been pumping out quality pop punk for over a quarter century through countless full lengths, EPs, live albums and compilation appearances. These good eggs hailing from Canada celebrated their 25th anniversary as a band by traveling to Bergamo, Italy in 2019 to participate in the 4th edition of the Punk Rock Raduno festival. This festival has become a global homecoming for all things both pop punk and Ramonescore. The McRackins recorded their career spanning set and present it to us in the form of this double LP. The band ripped through a 16 song setlist containing hits and deep cuts alike.

"Shut Your Mouth" off the S.T.U.P.I.D LP opens the set. The band asks the crowd at the beginning if they are going to have a punk rock party tonight. The McRackins definitely brought the party. They start off strong and tight right from the beginning. The backing vocals are stronger than ever with the addition of AC McRackin on guitars. At the conclusion they kick right into fan favorite "Mickey and Mallory" from the EP of the same name. One of my personal favorites "Candy" follows from their last proper full length LP. They perform this flawlessly with great guitar leads and backing vocals. The McRackins take a very short break before steamrolling the crowd with "Spazz" that has everyone singing along. The band next returns to the classic "Life, Hey Mikey" to keep the fun moving. The band shows their hard rock side through the performance of "Robbed" which follows. All guitar leads and solos are nailed perfectly on this performance. "Divided In Two" breaks up the monotony as a more harsh and dark track. Another personal all-time favorite "We Like To Make Records" follows. This is a love letter to all the vinyl junkies out there. As a treat to the fans, Fil McRackin takes over lead vocal duties on "Stop Looking At My Underwear" which is a track from his band's split 7" with the Evil O'Briens. Fil does an amazing job on this cover of the Sea Monkeys tune.

The second side of this live set opens with a performance of "Teenage Valentino" for the first time live in the history of the band. This is another track that showcases the more rock and metal side of the band. The McRackins turn to Ramonescore on the classic "Pollyanna" which follows. Bil McRackin sounds better than ever on this rocker about a punk rock girl. "Burnin' Bridges" is up next which shows the band turn to a more power pop approach. One of the best performance of the set is "Fairy Tale" through its amazing hooks and chord changes. The band goes deep to it's split 7" with the Cheeks for "Days Of The Week." This track has a strong Descendents/ALL vibe. The set winds down strong with Spot McRackin taking over lead vocal duties on "That's It." The hardcore vibes are strong on this track and performance. The short and brief "Uh Uh Oh" closes out the performance.

The sound of this album is crystal clear as well. This set showcases all eras of the band as well as all their styles and influences. This is yet another truly egg-cellent addition to the McRackins discography.