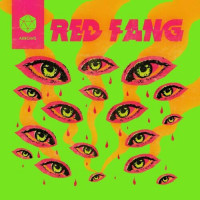 From the very start of the sludgy, creepy intro track “Take It Back”, you’ll know that Arrows is going to be slightly different from your typical Red Fang album. With their 5th full length, and no shortage of smaller releases in between, the stoner rockers from Portland have branched out on Arrows.

Make no mistake, this is still very much a Red Fang record and there could be no mistaking it for anything else. But the famously lighthearted quartet continue to evolve on Arrows, layering elements of more melodic styles into their traditionally sludgy swamp. The songs surely each have their own identity, but when pieced together in the astute manner they are, the album comes alive as a complete composition; the individual tracks are more like movements than they are songs.

This new venture towards slightly more conventional rock is first evidenced on the title track, which surprises with its repetitive simplicity before capturing the mind with its catchiness. Imagine if Sponge downtuned and used a chamber reverb.

That more riff heavy, alternative rock style is also showcased on songs like “Anodyne” and “Two High”, although sped up significantly and with the vocals closer to the front. They are both slamming, loud beasts, with just a bit of a groove to them, that are sure to become permanent staples in concert and in headphones. But the awesomely named “Fonzi Scheme” might actually top them, at least in terms of scale. The howling vocals and wandering guitars are layered with a string section; an unexpected experiment that escalates the track to an operatic level.

Even with the often upbeat nature of Arrows, this is no pop album, and the gloomy speculation of “Days Collide” should not be dismissed as out of place. Its run time reads a little long on paper, but the intertwined genre-play makes for a satisfying excursion that isn’t long-winded. “Days” and others like it also provide excellent contrast to the much briefer tracks, like the skate punk inspired bursts of “My Disaster” and “Rabbits in Hives”, and the unsettling instrumental “Interop-Mod”.

The grunge rock ease of “Why” brings in the back quarter of the set, heightening toward the scatterbrained fun of “Dr Owl”. The latter is a ripper, even if I would’ve preferred the drums to be less stifled and maybe brought a little further forward. It fits the style though, and it goes to show that even with the band trying out some new things, Red Fang still remain true to their nature.

In many ways, Arrows is the exact album Red Fang had to make, at the exact moment they made it. Five years ago, their previous effort Only Ghosts was generally well liked, but at times seemed stale and redundant. Whatever the reason for the long gap between albums was, it worked to their advantage. They have grown musically, taking their time to mould new ideas and influences into their existing template without ever compromising its integrity.