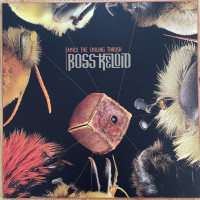 This is incredibly poor form for a review but I’m going to try to avoid spending much time explaining what Boss Keloid sound like. Not because I think people will necessarily know already, but because there’s a word count limit to reviews at which point readers just won’t engage. And it would take a lot of those words to try and explain Boss Keloid’s sound. So we’ll go with psychedelic alt-metal. I think that kind of works.

I’ve now freed myself up to talk about this, Boss Keloid’s fifth album and first on Ripple Music after the band moved from the ashes of Holy Roar in 2020. The band’s last full-length Melted on the Inch (2018) saw the band receive critical acclaim almost across the board. Through the record and a number of superb shows in support of it, the band begun connecting with more and more fans. This was maybe slightly surprising, because although the record was of unquestionable quality, what it also was, was fucking baffling. It’s not just metal, it’s not sludge, it’s not prog, it’s not alt-rock...bollocks. I said I wasn’t going to do this, didn’t I? Anyway, the thing that Boss Keloid do (whatever that is), is remarkably easy to vibe with. Big riffs, complex yet memorable melodies, a powerhouse vocal that could live as comfortably on Planet Rock as it could in a club show and a generally posi, summertime vibe; delivered with power.

Being completely candid, I was a late adopter of Boss Keloid. It took me seeing them live to really understand the beauty in what they do. This time around, I need no such road to Damascus moment. The band, who have been staunchly ploughing their own furrow since day one, have carried on down that path and have simply made their own music again, but have ramped up the anthemic gauge about 3 notches. What we now have is a combination of Tool, Jethro Tull, Elder and Live. The structures, progressions and passages of groove all keep you guessing, but also firmly grab you one after another, so you find yourself swaying one minute, banging your head the next, but you’re also never far from a transcendent, blissed out passage of magnificently bewildering prog bizarreness. The record is not much more than 45 minutes and yet manages to fit in the amount of ideas most bands would be delighted to lay claim to over an entire career. That being said, ideas are one thing, applying them is another. And that is the real genius of this band. To create a sound that basically no-one has made before and somehow make it one of the most organic, cohesive, interesting and downright enjoyable listening experiences one could conceivably imagine. The production is also entirely flawless. Precise, but without sounding sanitised or clinical. The instrumentation has all the space it needs to breathe but is still able to envelope you whenever it wishes.

I know people who have been awaiting this record with feverish anticipation for some time. I confess I was a might more lukewarm. I have, not for the first time, been proven wrong. Because this record is magnificent. In a world where true originality is harder and harder to come by, Boss Keloid not only have it, but they wield it with a sure-footedness and style that is rare and should be cherished. I said I wouldn’t try to explain too much how they actually sound. I may or may not have succeeded, but what I hope I will have done is at very least instil a degree of curiosity in you. Because you should listen to this. Everyone should.