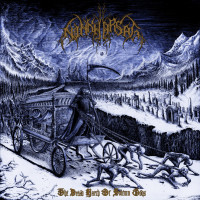 2021 has been a strong year for black metal thus far. It’s almost as if the global sense of dread, hopelessness and peril has in some way fuelled the creative fire of black metal bands the world over… Weird, huh? In fairness, the wider black metal scene has had more green shoots sprouting from its frozen, rotting ground over the last few years than one can count, but 2021 has borne more bands and records that subscribe to the more ‘trve cvlt’ style (if not politics, mercifully) of black metal than in many a year. I’m here to talk about one such a record. Ninkharsag, coming from Liverpool, UK have been a band since 2009. They have created a lot of music in those 12 years, but 2021 sees the release of their second full-length and what, with any justice, will be their introduction to the black metal community at large.

As I’ve already alluded to, Ninkharsag are a black metal band in the true sense. Trebly, tremolo-picked guitars, blast beats, white noise screams, artwork depicting the reaper being drawn through a bleak tundra by his chained minions…(sufficiently similar in colour and style to probably be an homage to Emperor’s In The Nightside Eclipse) Depending on your tastes it can suggest you’re in the wrong place or a safe pair of hands. For me, the band hit a sweet spot of taking cues from some of the originators of the genre like Mayhem and Emperor but benefiting from the melodic tendencies of the likes of Naglfar or even Rotting Christ. There is a blistering, white hot (or maybe cold?) ambience to many of the songs, as well as the sure-footedness that comes from a band who have honed their craft. The title song for example, moves through myriad acts in its four-minute runtime. The structure is unorthodox and carries an undulating sense of dread throughout, whilst rarely dropping below a nine in terms of intensity. Even the mid-song break wields a riff of such jagged malevolence that you know it’s going to do damage when the band come back in as a unit. And it delivers on that promise.

But to backtrack a little, it’s the smattering of melodic nous that makes this record particularly worthy of note. The band have at their disposal an ability to take a ‘standard’ black metal song; then elevate it and to conjure something almost entirely different within a five or ten second passage of solo or unexpected, icy melody that takes the sound from Super8 to IMAX. The solo in “Under the Dead of Night” is a perfect example. The song is excellent anyway, but the ‘skeletons with swords aloft on horseback’ feeling that the solo evokes is just glorious. Big tip of the cap to guitarists Paul Armitstead and Kyle Nesbitt for the whole record, to be honest. Kyle also handles vocal duties and does a superb job of enunciating the lyrics whilst not losing one iota of the classic black metal vocal style’s impact. Lyrically, it’s dextrous and remains interesting throughout, as well. The record was produced by Chris Fielding (Conan, Winterfylleth, Primordial) and as you might suspect, it sounds magnificent. The modern trick of producing black metal bands so that you still have the effect of the scene’s progenitors but the lushness that a smattering of modern techniques allows.

I’m aware how much I’ve spoken about this being true to the roots of black metal, but because of the production, the melodies, the intelligible lyrics…ironically it’s probably not a bad entry point if you’re thinking of getting into black metal for the first time. It also helps that it’s just a superb record as well, of course. So just as the summer is threatening to kick in over here in the UK, you’ll find me sat in my garden, in full corpse paint, drinking red wine from a goblet and listening to this. And I’ll have a smile on my face the whole time.