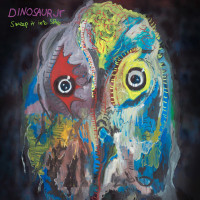 Let’s address the elephant on the album head on. Kurt Vile is basically unlistenable. He should be an anathema to any self-respecting punk rocker. He’s now six decades removed from a time when he would be called a hippie. Punks hate hippies. Kurt Vile’s music is an expression of why hippie music is terrible. There are two songs that are longer than ten minutes on his last album. Horrific. How do you even begin to justify that type of directionless acoustic guitar strumming over dispassionately drawled vocals over a time period that could ostensibly be eight songs on a punk record? Now, is there a thread line between Vile and the former punkers with an infinity for jangly pop songs in Dinosaur Jr.? Likely. Did it need to be explored? Ehh...

Sweep It Into Space is the latest in a formidable collection of post-reunion albums that have outlasted the initial run of Dinosaur Jr. The band did the unthinkable over the last decade by making albums that were as good, if not better than the original material their fans fell in love with. Hard to recall another band with that type of consistency. So when Dinosaur Jr. announces a new album, it’s easy to get high hopes. This time, however, they announced the affair would be co-produced by Vile with lead single “I Ran Away” that also featured Vile on 12-string guitar, which of course is six too many for a rock band. “I Ran Away” sounds like Vile drank some coffee and ruined a Dinosaur Jr. song.

The album opens up with a trio of redeeming songs that while showing Vile’s influence, still manage to keep the band’s post-reunion reputation intact in spite of it. “I Met The Stones” has big Thin Lizzy riffage that drives guitarist/vocalist J Mascis right into an amp-turned-to-11 closing solo. There are moments like this throughout Sweep It Into Space that seemingly drop Vile’s influence and leave the band to what they do best. These are the moments where the fuzz flies out the amps into a swirl of guitars rather than smothered in a layer of haze and pointless acoustics. The indie rock of “Hide Another Round” is just this type of classic J Mascis punk song that never gets old.

Unfortunately, Vile’s presence is felt too many times. Noticeably the vocals sound cleaned up for Dinosaur Jr. It makes songs like the Lou Barlow sung “Garden” lack punchiness, bringing that same intentional detachment that frustrates Vile’s discography to Dinosaur Jr. If not for the buzzy guitar solo into the last chorus, it would be permissible to mistake the song for a R.E.M. song and not in a good way. By the time you hit “Walking To You” near the end of the record, an inoffensive song that would likely benefit from the energy of a live performance, it’s impossible to not blame Vile for what he did with his co-production credit on Sweep It Into Space. A point that’s proved in the closing minute of the song when the band starts to dial up the intensity. None of this even touches on the ill-considered “Take It Back” which sounds like Jimmy Buffet murdering a Vampire Weekend cover.

The band has said the recording of Sweep It Into Space was disrupted by the pandemic forcing the trio to split with Vile leaving some of the album’s final editing to be undertaken by J Mascis alone. It sounds like that. It’s just too bad the album was mostly done by that point because Vile’s heavy producing hands did Dinosaur Jr. no favors. If the question is, did the thread connecting Vile and Dinosaur Jr. need to be explored? Sweep It Into Space confirms the answer is no. The band’s first miss post-reunion.