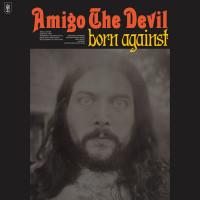 I first saw Amigo the Devil in 2017 when he was opening for the black metal band Ghost Bath. Later this year he’s playing Riot Fest. It takes a special skill set to fit into both of those environments, especially when you don’t sound particularly like either. So it goes without saying that Amigo the Devil, the stage name for one Danny Kiranos, is versatile as hell. He writes music that appeals to anyone who likes a bit of darkness and rebelliousness in their music. His dark folk music, also dubbed murderfolk is impressive, as is his lyrical creativity. It might not be your usual cup of tea, and as he notes in “24K Casket” you might prefer a little whiskey, but there’s something you’ll enjoy on Born Against, regardless of your usual taste. For nothing else, you need to hear the greatest song ever written about bingo.

Amigo the Devil’s template are these dark, menacing folk songs. Some are serious and intense (“Drop for Every Hour”), others clearly have a fun sense of humor (“Murder at the Bingo Hall”). Some of his dark intensity takes aim at religion, with songs “Shadow” and “Quiet as a Rat” putting organized religion in the crosshairs. “Quiet as a Rat” feels a bit like Tom Waits, particularly on “God’s Away on Business” with the assortment of instruments popping up, but without Waits' rasp. Actually, Kiranos goes in the other direction with a lot of his vocals; he has some very impressive pipes and shows off that range. Opener “Small Stone” is a bit of a lo-fi intro, until he decides to get operatic there for a bit. “Different Anymore” has an emotional delivery, particularly on its catchy chorus.

One of the trademarks of folk music is the ability to tell a story in a song and some of the tunes on Born Against do that just brilliantly. Album closer “Letter from Death Row” is heartbreakingly beautiful and feels exactly like the title implies, as the narrator recounts their last thoughts of their dearly beloved. It’s a folksy, emotional closer and the murderfolk way to write a love song. “Another Man’s Grave” is another highlight and in a weird twisted way reminds me of Billy Joel’s “Piano Man” – wait, wait, just hear me out. It’s got a similar tone, this kinda triumphant build feeling throughout and the narrator recounts all of the people they witness in the bar before getting deep into their own story instead of everyone else’s. But yeah, then it starts feeling darker, as the narrator grapples with their own sexuality and once again Kiranos’ vocal performance is stellar, making these emotional songs that much more intense. This is followed by “24K Casket” which is catchy as hell and definitely subscribes to the Andrew Jackson Jihad school of sad songs sung happily. From the thumping upright bass to the handclaps to the jolly tempo pickup halfway through, it’s the most folk-punk song on here. And the darkly hilarious lyrics are absolutely brilliantly hilarious. How genius lines like “Everyone says money can't buy happiness / And so far in my life, I'll agree / But it seems a lot more comfortable to cry in a Lamborghini” didn’t end up on People Who Can Eat People… I’ll never know. I’m glad it’s here though, cause this whole song is just one big highlight into the lyrical dexterity that Kiranos throws onto Born Against.

Oh, right “Murder at the Bingo Hall.” It’s dark, it’s fun, it’s gallows humor, it’s a western gunslinger showdown-esque song about playing bingo. Seriously. The use of tension and dynamics in the song is brilliant, Kiranos’ vocals are incredible, and it’s right out of a country/western tradition, but twisted into its own unique thing. It’s a perfect analogue for the music Amigo the Devil makes and another reason for you to check this out, as it’s somehow different from everything you thought you’ve heard before.