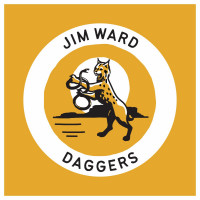 Jim Ward is one of my favourite artistes of all time, not just for the work he's done with At the Drive-In and Sparta, but for how he views art in general. He's embossed old-country into his repertoire with Sleepercar and his solo work, but it's just his perspective on life itself I really adore. From opening his own restaurant to his outlook on culture, he really has a more nuanced sense of storytelling I gravitate to, and it's a pleasure hearing Daggers once more cutting this kind of figure.

What I like about this album is it really does feel like all his musical influences and acts are mashed together in one, bar ATDI. It's a guitar and solo-driven record filled with character, waxing on about Texan life and love in a pandemic. To top it off, he's got Tucker Rule of Thursday on drums and Ben Kenney of Incubus on bass, and after hearing how it all came together, I'm hoping I get to speak to him on how they produced it all without even being in the same room under these trying circumstances. That's because, as much it's about being a fanboy, I'd love to hear how they refined things with the production as crisp as ever.

From the opener "Day by Day" to the anthemic yell of "Paper Fish," Ward's cultivated something a lot louder and more melodic than I anticipated. I was expecting more whiskey, dragging rock and roll, but it's punk, post-hardcore, some post-rock as well. Not to mention, everything's sprinkled with an alternative, accessible and mainstream topping. And honestly, it's a sound well-worn. You've even got some Springsteen as well as he swims a beautiful range, letting his throaty yells stand out with an Americana stance on songs like "Blink Twice." Seriously, his vocal integrity has been protected, knowing when to patiently roll its sleeves up and when to raise a fist in the air to give us a sonic signature that feels like he was plucked from prime Sparta.

I admit, at times I wanted more urgency, but after a few listens, the balance is there. It's proper slow burns mixed in with hooky loud swells, allowing Ward to flex a bit more than other bands would let him. "Failure" is a nice example of this, as well as the poppier "Polygraph (Attack)." I would say that Ward should tread more punk ground moving forward as the sharp, abrasive "I Got A Secret" with War on Woman's Shawna Potter works so damn well. It washes away the aftertaste of a really bad music video and feels like something Ward would be comfortable in, especially on a live setting.

As the record closes, the tracks start to blend a bit, surprising me we don't have an acoustic or two as intermission. But that said, Ward kills it on Dine Alone and apart from being a great addition to their discography, this is proof that some creatives are truly timeless and age like wine.