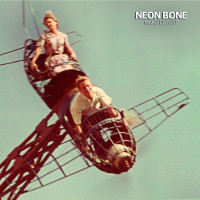 I’m finally getting around to reviewing this record. I had intended to do it right when it came out a few months ago, but for whatever reason, I never got to it. But it was always in the back of my head, so I guess that means the songs must have some sort of staying power.

The band itself is somewhat tough to define. It started over 10 years ago as a one man project and has eventually morphed into a quartet of sorts, though it’s not exactly clear what roles are filled by which members. While the makeup of the band is somewhat shrouded in mystery, the sound of the record is anything but. And that’s not necessarily a bad thing. The entire record is swamped in a mixture of Ramones-style pop punk, Beach Boys harmonies, ‘60s doowop revival, and ‘90s era pop punk.

Despite having a what appears to be a fairly straightforward formula, the band throws somewhat of a curveball with the opening track “Number One”, merely because it is the least pop sounding progression on the record. Nevertheless, it is still catchy, offering up a fairly clear glimpse of what’s to come: crunchy guitars, simple yet effective leads, catchy melodies layered with a healthy dose of harmonies, and a concise lyrical focus. Most, if not all of the songs, revolve around relationships. Sometimes silly, sometimes serious, it’s difficult to tell if the songs are based around real life connections (both romantic and plutonic) or if they are simply stories that fit well with the music. Either way, it works and the content somehow remains fresh.

The overall simplicity of the record is fairly deceiving. The instrumentation and song structures are more or less routine, yet little nuances are peppered in to keep the listener interested. For example the slightly different chord changes at the end of “You’re Eating My Brain” enhances one of my favorite tracks on the record. And on “I’m Coming Home”, the various parts of the track are all mashed together at the end, making for a cool song structure. And after listening to the record, it’s easy to forget that the band is from Germany. The lyrics are sung with a very clear pronunciation, sometimes bending the words, like on “Baby Don’t You Cry”, turning the vocals into an instrument.

All in all, this is a fun little listen. It may not be for everyone, especially for those looking for profound lyrical content or complicated songwriting. Despite this though, the songs are well written. And though they may seem simple, the lyrics are relatively clever, especially for someone writing in a second language. For those who love this style of pop-punk, you won’t find a bad song on this record.