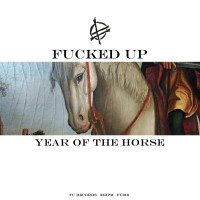 If you thought David Comes to Life was as epic as punk could get, Dose Your Dreams proved you wrong. If you then thought Dreams was the top of the prog-punk mountain, you were wrong again. Fucked Up’s newest entry in their zodiac series (until now, a series of extended 12-inch maxi-singles), Year of the Horse is four full sides of psychedelic epic punk story telling. As with all the Fucked Up concept records, the plot is complex and the record comes with a libretto that fills you in, ala the classic Italian operas. Very roughly speaking, the album is about a horse named Perceval that breaks free from the clutches of death and confronts the forces of the universe itself, other mystical horses and witches. Got that? No? That’s fine.

This record is crafted to be massive and not just sonic chewing gum (though simple, thumbs nappers are cool too) and to that end, it requires study and repeat listens to “fully “ grasp- and you won’t ever fully grasp it because with Fucked Up’s more recent King Crimson/Pink Floydian adventures, the record is just ambiguous enough to raise questions instead of fully answering them.

What’s particularly neat here is that record masterminds Mike Haliechuk and Jonah Falco have forged their most diverse and chameleon-onic sound bed to date. This record flips from Integrity style smashing to Metallica thrashing to Medieval lute play to robo-soul to goth Morricone to Sleep homage to something that sounds like slowed down trip hop, all in one continuous bleeding journey. The dozen plus guests here add to the sonic warp-sphere making this album a galaxy unto its own, and it also makes it a very unpredictable record. There is the risk of the record being too disjointed or too hoity-toity, but that never seems to happen. Why? Maybe the band stays on a theme just long enough before jumping to the next toadstool. Or, maybe it’s because every time the record approaches the indulgence of the worst of ‘70s prog, long running vocalist Damian Abraham comes in and smashes the thing back to earth, as aided by straight up hardcore guitar pummeling.

The album sounds like it wasn’t necessarily planned in advance. Rather, it seems that as the crew kept stacking ideas on top of each other, more and more ideas grew. That can result in a real mess of a record, or, as with records like Exile on Main Street or London Calling, it can result in something truly special when the band is in the zone. Now in their 20th year, Fucked Up is still in the zone.