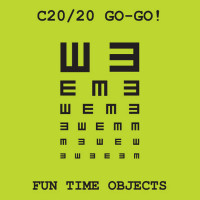 Fun Time Objects sound FRESH. Ostensibly, the band sits between first wave LA punk (they even cover the Bags) and the first wave of new wave. On C20/20 Go-Go! (hopefully a Bow wow wow reference) their tunes are high strung and jumpy and the pop forward with an antsy energy. Vocalist Clare wavers between an affected distance and deadpan drop while telling tales of urban discord and future chaos.

“MTA Fare Evasion” is about how much going to work sucks and how hopping the turnstile is the right thing to do. I dig it. The best part, however, is that while it seems like it’s just a song about being naughty, you can extrapolate it into a bigger point about modern living in a country where the rich are getting richer and the poor are getting poorer. This is the kind of thing that all the best punk rock does- it’s simple on the face, but complex on a second look. I also like how the subway car door bings just as Clare yells “fuck!”

The band was formed by bassist Benzoil P (aka ben Mancell) with the intent of making perfect two minute songs. He, and the rest of the band, do that here, even though all the songs aren’t two minutes. The tracks are economical and cut down to their bare essence. Every note has an effect here. Every drum beat serves a purpose. Plus, the other result is that this is punk that is poppy, but it’s not pop punk. That is, it’s catchy and dangerous. It springs with the energy of B-52s, but also holds the snarl of the classic Dangerhouse records. It’s not all hatred, though- “Hey! Joey” is a fun Ramones tribute. Though the track after it, “Bug Eye,” lingers with a Germs style menace.

The fact is, Fun Time Objects have nailed it. This album is fast, fun, and a little threatening. Now that they’ve got their core down pat, the next thing to do is swing big and go for a masterpiece. I think they’ll knock it out of the park.