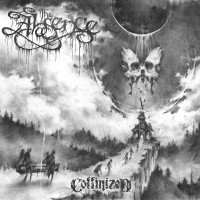 I have an unusual relationship with melodeath. Despite being a huge fan of melodic music in various guises, I sometimes find the Gothenburg style of death metal to be a little…pantomime. If that sounds ridiculous, that’s because it probably is. But when you have bands like Amon Amarth, Ensiferum and Turisas garnering huge support then maybe you can start to understand my misgivings. It may be true that it’s the folk/Viking/gimmicky aspect that really puts my hackles up, but it does mean that aside from the kings and originators of this sub-genre, I do tend to have a bit of scepticism. When it’s done well, I really like it, but if a band has the propensity to lean towards the Euro/power/symphonic metal thing too heavily, then I find it’s quite easy for the jagged edges of death metal to be sanded down too severely.

When this record opens with some foot-on-monitor dual lead work with a swirling wind backdrop I confess my shoulders did drop. But not for long. A mere 45 seconds into the opener which also happens to be the title track, I felt that there was less cause for concern. Vocalist Jamie Stewart certainly isn’t leaning on the melodic or operatic too much. He rapidly spits bile over the stabbed, staccato riffing that often underpins this style of music, but it’s done with a ferocity and conviction that ticks all the right boxes. Phew. That’s one of my concerns allayed. I did mention the dual leads that open the song; they do appear relatively liberally throughout the album and that obviously conjures the denim, leather and studs heavy metal aesthetic that will always be desirable when listening to an album called Coffinized but it doesn’t feel overly ‘trad’ at any point. The guitar tone is not hugely distorted either. Yes, there’s a lot of gain so that the chords feel chunky, but there is a tight, precise feeling to the lead work that is enough of a departure from the more extreme production styles that will make this more palatable to most people, but it still feels sufficiently metallic.

Considering these factors, it might seem unlikely that the record could carry much in the way of melody, but how it manages to do so is the true strength of this record. The musicianship is exemplary. Bass, drums and both guitars are always being played in a way that showcases the talent the band have, but rarely does it feel like it is being done for the sake of it. The pace and structure shift frequently, but each time they do, all the individual band members feel completely unified and committed to each passage. A perfect example is halfway through “Choirs of Sickness”. The song completely ceases to be what it has been up to this point; stopping on a dime, a gentle arpeggio is ushered in, followed by classical guitar and soft hi-hats/cymbal work before breaking into an extraordinary solo which carries both virtuoso playing and emotion (not always easy bedfellows). There is even a clean, semi-monastic vocal in this part, but remarkably that doesn’t grate on me because it feels so in-keeping with the stylistic shift.

I’m admittedly more inclined to like the darker and heavier purveyors of this style as I’ve mentioned, but irrespective of that preference, this record carries huge, swelling melodies, enough grit and grime to scratch that death metal itch, but also songs like “Cathedral Dawn” and “Black Providence” that stay true to the roots of the genre and deliver it in such a way that feels impressive without being in any way, well…silly. I think if I was to try and triangulate the sound of this record, then somewhere between The Black Dahlia Murder and Dark Tranquillity would feel like a sufficiently accurate positioning, but there are also points (“Future Terminal” for example) where the innate kinetic energy of the record puts me in mind of The End of Heartache-era Killswitch Engage. And who, as a metal fan, doesn’t enjoy at least one of those bands?

Writing this has been a bit weird because it’s the second time in a month I’ve reviewed a record that has featured the pairing of Jeramie Kling (drums) and Taylor Nordberg (guitar) and both times I’ve been genuinely taken aback by the quality of the record. The other, (Rat God by Inhuman Condition) did one thing I adore to an incredible standard, this record however, does something I’m less predisposed towards to an equally high standard but arguably is more diverse. When it wants to, it soars, it gallops, it shreds, it stabs. My fear is that with At The Gates dropping their new album a mere 7 days after this, it might get lost in the whirlwind of excitement around that. I hope not though, because this is one of the most satisfying and enchanting records of this ilk I’ve listened to in some time. It is, quite literally, most triumphant.