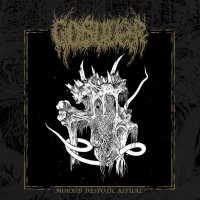 I’ve written up some more light-hearted stuff (it’s all relative, admittedly) in the last few months and it may have led people to believe that my tastes had mellowed somewhat. Hard to say if that’s true, given how inherently skewed someone’s view of their self will always be, but anyone who is here for the nasty shit; I’ve got something for you.

I don’t know what Gosudar means. I can figure our Morbid Despotic Rituals, but it doesn’t really matter a whole heap here. What does matter is the content of this, the first full-length from Moscow’s Gosudar. We’re in grimy, cavernous death metal territory. Think Tomb Mold, Witch Vomit or Ossuarium. Basically, (and I mean this in the best possible way) 20 Buck Spin’s home turf. I mean that in terms of style, production and most importantly, quality. It has the denseness of the most enveloping of modern death metal in that it pummels, it swirls, it throttles. Each of those things, depending on your preferences, can sound inviting or completely repellent. What can’t really be denied though, is that the malevolent atmosphere conjured up by this record is all-consuming. I suppose you could pop it on in the background if you really wanted to, but to truly benefit (almost certainly the wrong word in context) from what this record is capable of, you need to give yourself over to it. The final passage of “Awakening of the Realm” for example, feels like tumbling into Dante’s seventh circle. Literally descending lead lines precede a bludgeoning vortex of a finale, accompanied by roiling drums and inhuman vocals that the very elite of this style would be proud.

I’ve spoken in the past about the transportative powers of death metal and also doom. There is obviously an entire sub-genre dedicated to that mix, but here, Gosudar opt for sparing use of the funereal pacing that evokes the grimmest of imagery, only to drag you back to the bruising, mid-pace battering that they are more predisposed toward, before blasts and solos pull you back into the meat grinder. It truly is a dizzying ride. At 33 minutes across 6 songs, only the most ardent of masochists will be left feeling short-changed when the record reaches its denouement in the shape of the album’s title track and closer.

A lot of death metal bands can do the brutal thing. A lot of them can do the quagmire-style, sliminess. Many can even incorporate impressive musicianship into their work, but not all can do these things whilst also sounding classy. Again, it sounds like an incongruous word when talking about this particular art form but it is definitely present here. If you’re a 20 Buck Spin fan (and most death metal heads will be), then you owe it to yourself to give this some time.