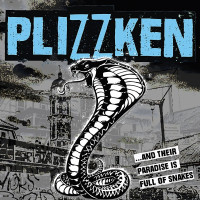 Streetpunk fans should be familiar with Stomper 98. The German crew has been cranking out hard edged oi for more than 20 years. (It also didn’t hurt their profile when exceptionally productive guitarist/vocalist Lars Frederiksen played on their 2018 album Althergebracht.) When S98 vocalist Sebi Stomper decided he wanted to do an album entirely in English, he formed Plizzken. He also chose to take his new band in a slightly different musical direction.

FYI - Plizzken doesn't appear to be a real word, German or otherwise. It would seem to be a reference to Snake Plissken, the character played by a young Kurt Russel in the great 1981 John Carpenter film Escape From New York.The snake in the album’s title may or may not confirm this.

Plizzken are essentially a straight up punk band. ...And Their Paradise is Full of Snakes is 13 tracks of catchy, occasionally even melodic punk. The German language sounds harsh to the American ear, and it helps make Stomper 98 seem very angry. The German accented English actually has a similar effect. Plizzken can come off a bit more aggressive than musically similar acts, but that doesn’t make the songs any less catchy.

Although the sound has changed, the inspirations for the songs really haven’t. It’s all about the poor versus the rich, the working class against the ruling class, and trying to live a successful life outside of society’s norms. The lyrics often feel more serious than the music, creating an interesting tension. The songs work together to create a cohesive LP. At 50 minutes, it’s twice as long as many punk records, but the musical variety keeps it from ever becoming tedious.

While there’s not a weak song on Snakes, highlights include opener “Wasted”, “Street Education”, “Dead or Alive”, the title track, “Dear All Happy People”, “In the Gutter” and closer “Unwanted”. The common theme is feeling like an outsider and rejecting the German equivalent of the American dream. The occasional use of organ helps take the harsh edge off, and adds an extra dimension to a handful of the songs.

The bottom line? Like their apparent namesake, Plizzken are thoroughly entertaining. Maybe more importantly, they’re able to deliver their pointed message without coming across as condescending. This is solid front to back. Punks of all different stripes are going to enjoy ...And Their Paradise is Full of Snakes.