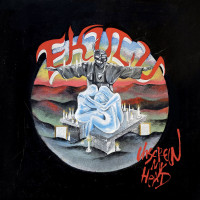 For reasons that I can’t entirely articulate, summer feels like the time of the year that thrash-adjacent music makes a lot more sense. No-one particularly needs ‘a very Anthrax Christmas’ but an afternoon turning into a night of beers in the sun is always improved by a soundtrack of thrash. I guess it’s just the LA/Bay area climate that the style is so synonymous with. So with the improving weather, I’ve been hunting out thrash and crossover in recent weeks. And predictably, the release schedule does start to swell with this stuff around this time of the year. And in my ongoing mission to bring good shit to people’s attention, I’m writing up a few of my recent favourites, starting with Ekulu.

Whoops. Should have given a spoiler alert, I guess. Fuck it. Now it’s out of the way, I’ll talk about why I dig this record. Ekulu have only been around for a few years, releasing music since 2019, but have built a bit of a buzz for themselves in the relatively short time they’ve been on the scene (hardly surprising given Ekulu features members from Ecostrike and Candy amongst other bands). Despite my thrash-focused opening, the band are a NYHC band before anything else. They hail from the big apple, have the classic stomping, antagonistic approach of bands like Cro-Mags, Madball and I even hear a lot of Backtrack in their sound (man, I miss Backtrack...). But on top of the relatively metallic guitar tone, it’s the frantic, almost jittery delivery of the riffing, along with the screaming solos (“World of Uncertainty” and “Who’s In Control?” have some glorious examples) and occasionally dramatic drum work replete with ride and hi-hat, that takes this away from being your typical hardcore record. These elements combined bring about a sense of the band being very happy to live in a crossover pocket as opposed to being staunchly NYHC, and in a post-Power Trip world where people are looking for bands to scratch that particular itch, Ekulu do it as well as almost anyone.

Another tick in the box comes in the form of brevity. Nine songs in less than 29 minutes means you’re left wanting more no matter how many times you press play. Vocally, there’s occasional gritty cleans along with the more typical crossover rasp, but rarely does it fully cross into scream territory; another reason why I think this could appeal to a lot of people. It’s party music, but it has the impassioned and righteous delivery of hardcore. The songs have more melody than is often the case in NYHC but lose absolutely none of the impact. Crossover was always a great idea, but it hasn’t always delivered on the potential of the premise. Ekulu manage it. Astonishingly well for a band on their debut record, it has to be said. “Half Alive” sounds like Guns ‘n’ Roses playing Power Trip at CBGB’s for god’s sake.

The record feels like what John O’Connor from T2 would have made if he had a group of super talented buds (and didn’t have to go save the world or whatever the fuck). It’s angry, but feels sun-soaked and brimming with curled-lip, street punk aggression and vigour. If that sounds like it might be your thing, then it probably is, because there is no question about the quality Ekulu have served up. I’ve forced this down a lot of people’s ear holes in the last few weeks and I’m yet to get anything back other than thanks. So there you go. You’re welcome.

Plizzken: ...And Their Paradise is Full of Snakes