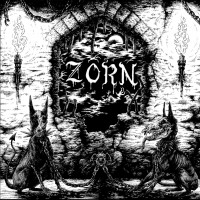 Hardcore Zorn is the “proper” 7-inch release of Zorn’s last cassette tape of the same name. As before, the band blends death rock with metal, and keeps the sound nice and grimy. “Lament” has a spiraling guitar that walks a riff between NWOBHM and death metal twisting while lead singer Eric howls like a banshee. The whole thing is spooky… and it rocks. Where Zorn succeeds on the release is that while this album is certainly influenced by the darker rock genres, the band avoids falling into cliché or pure dedication. Rather, as these songs twist and turn (and they twist and turn a lot), the band pulls from genre trappings as much as they toss. “Lament” along has a black metal crunch before whipping into a hardcore blast before fading out into an ambient hiss. I also like how “Keeper of secrets” folds into a hardcore crunch before speeding up.

Wisely, the band very makes the EP feel like a complete release, instead of “here’s four more songs.” While these tracks fit together thematically and sonically, they each have their own character. “Fickle blessing” has a whirling melody that almost sounds power metalish while the aforementioned ”keeper” is as down and dirty as it gets. The songs cover all things death, dark, destructive, and occult and a big part of the fun is figuring how much here is a true ode to evil and how much is just a recitation of a good Hellblazer run. And that’s kind of the point where all the best dark music rests. Sure, rudimentary Peni is some of the heaviest stuff there, but once in a while, they turn and laugh with you… and sometimes they just laugh at you. The same could be said for Bauhaus, Slayer, and Celtic Frost. Still, when the whole gang roars with a cacophonous gang chorus on “Fall to Pray,” the band makes it a point to obscure where the serious/satiric line lies. And that’s the exact part where the band is most fun and most effective. Full length please!

Let Me Downs: Tacoma is for Lovers