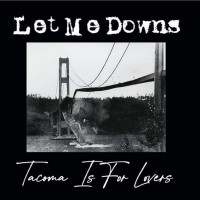 Let Me Downs are a newer band made up of a trio of older guys. Their sound is definitely a throwback to the golden era of Epifat, but it feels natural, not forced. Tacoma is for Lovers is 11 catchy tracks about having your beating heart ripped out of your chest. Fortunately, you don’t have to be a resident of Dumpsville to appreciate what these guys are doing.

“Delayed Departure” kicks things in a style reminiscent of vintage Face to Face. That band seems to be a major influence. You can really hear it in the basslines and harmonies. “Into You’ builds on that and throws in some mid-period Screeching Weasel. “Looking Back” and “My Year” recall painful memories. “Jameson on Ice” and “Alcohol or Guillotines” talk about drinking said memories away. The latter does it at a breakneck pace that might remind you of early NOFX.

The title track comes in the middle, and is the emotional centerpiece of the record. “Tongue Tied”, “Runaway” and “Never Enough” explore the heartbreak of trying to save a doomed relationship. Closer “Sad Song” starts out like it’s going to be one of those old punk turns outlaw country things until it kicks into high gear. Since the whole album is built around a central theme, it feels very focused and cohesive. It manages to be sad without truly crossing into emo territory.

Although this is Let Me Downs’ first album, it doesn’t feel like it. These Arizona and Washington scene veterans arrive fully formed. With their growing pains far behind them, Tacoma is for Lovers gets it right the first time.