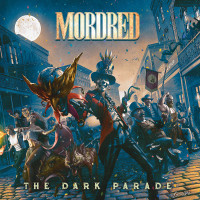 You don’t often see the words “first record in 27 years” do you? First in 5, 10, maybe even a tad more in rare cases, but 27? In all likelihood, some people reading this wouldn’t have even been born the last time Mordred released a record. The point being, things have changed a lot since 1994. It was the year of O.J. Simpson, Pulp Fiction and Nelson Mandela being elected President of South Africa. It was 2 years before the summer of Britpop and still a decade until Facebook was launched, for context. My god, I feel old just thinking about it.

It might seem cruel to do so, but that’s where I’m going to start with this record. Can a band who have been around for over 40 years, inactive in terms of recorded output for well over half of that time, with a history that spans 14 different members produce a record that is relevant in 2021? The answer is that yes, of course that is possible, but have Mordred managed it? The answer to that is a little more complicated. Mordred’s musical fusion approach always made them a bit of a curiosity. Emerging from the bay area thrash scene but not necessarily fitting in with many of their contemporaries sonically, they continued to experiment and as a result, you’ll probably hear Faith No More referenced as a comparison more than anyone else. I totally understand why, but style and quality are by no means the same thing.

But let’s focus on the positives for a second. Mordred are known for being musically diverse and that is still very true in The Dark Parade. Throughout the record you have thrash, groove, rock ‘n’ roll, woodwind, brass, baffling cinematic backdrops (horses, dogs howling, fire engines, trains, machine guns…) and more; alongside their semi-trademark keys and scratching. There are also spoken word passages, rudimentary synthesised speech…I could go on. As I say, it’s fascinating, but the flamboyant canvas does rather detract from the songs sometimes. If you think of how busy and overblown Chinese Democracy felt, well this has echoes of that at points. Sometimes for better, often for worse. Another positive though is the production itself. Ignoring some of the wilder bells and whistles, the instrumentation sounds great. Big, lush and rich. Chunky riffs and mellifluous shreddy solos abound. Actually, both guitarists (James Sanguinetti and Danny White) do sterling work throughout. Vocalist Scott Holderby also does a solid job of matching his style to the musical backdrop. This is arguably a back-handed compliment because his occasionally Jello-esque delivery can sometimes come across as a bit ‘wacky’ and although it fits, it can push the songs dangerously towards goofy. Which is a shame because he’s got a fine set of pipes and impressive range when deployed to the best effect.

I think there’s a matter of taste that will come into people’s individual enjoyment (or otherwise) of this record. What it does, it does occasionally brilliantly, but it does still feel very much rooted in the 90’s, stylistically. You could totally imagine it being on a THPS soundtrack, basically. And that’s going to resonate with some people more than others. Oddly, I adore the THPS games, but I don’t know that making music like this in 2021 quite works as well as I wish it did. Some of the samples, scratching and so on do feel a bit dated as well. But if you like the idea of clean vocals over rock ‘n’ roll-infused thrash with an absolute cornucopia of baffling twists and turns (the instrumentation on the title track alone is a pretty good example) then there’s every chance you’ll enjoy this. And even if you don’t like the sound of that too much, I’d still suggest listening to this just to get a feel for what this band have been cooking up for the best part of 30 years. You won’t be bored, I can promise you that much.

Let Me Downs: Tacoma is for Lovers