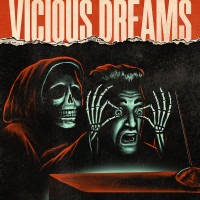 Orlando’s Vicious Dreams have been around a little while now, but their self-titled album is the culmination of what they’ve been working towards. Certainly, the band is a “punk” band, but in contrast to many modern Maxrnr types, conceptually the band is more on the Joey Ramone tip than the Crass one, and in true Joey style, almost every track here deals with either inter-personal relationships or mental hygiene. That’s all well and fine because they do it so well.

So, sure, the Ramones are a sonic hallmark here, as are the Boys, Vice Squad, and Paul Collins the beat. That is to say, these tracks are peppy, tightly written, and just a little sugary (but not too much so, thankfully). Opening track “Wonder Why” is about leaving a toxic person in the dust all set to a charging second wave style charge. Everything here is written with an ear towards tunefulness and classic songwriting- that is, if this gang was born in the 40s instead of the 80s/90s, they probably would have been a Frankie Vallie or Shirelles type group- and I mean that as a great compliment. That is to say, while the art itself has a punk aesthetic, at its core its catchy, honest songcraft that just happens to wear a leather jacket. If anything, this shows how the band is so assured of themselves in that they don’t need to put on airs.

Pretty much every track here is high energy and bouncy. “Thrash” is a particularly sing-songy track which represents the album with its call back chorus-verse. Amusingly, while the song first seems to be an “I miss you baby” type song, it subverts cliché because I’m pretty sure its about missing a deceased pet. Thar’s a nice twist to hide what is an ostensibly classic style track. Notably, the band has a tight ear for the classics. While each of these tracks is built off the Ramones-look-to-the-50s classics formula (or perhaps, as with “I’m Alive” Sloppy-
Seconds-Looks-to-the-50s) the band is quite clearly experts of the style as its pretty amazing how many hallowed moves they pack into the 14 tracks- the second half of “I’m alive” where the band breaks down into handclaps and gang choruses really packs a wallop.

They do add a bit of danger to the music as well. A number of tracks are about being cracked out in the head. “Bumper Cars” and “Still breathing” are about just that. Despite the band’s fun upper level, there’s a fair amount of misery and distress bubbling to the top. Wisely, instead of focusing on this contrast and playing it up, they play it as it lies, which is why this release feels so well constructed.

Almost every, or maybe every, track here is tightly written and calls back to the great moves of 50s rock (or maybe what we think are the great moves of 50s rock but actually weren’t… one recalls many Ramones/Sloppy Seconds homages to the 50s greats wherein the homage didn’t actually reference anything, it only appeared to do so). All of that to say, is the band has nailed their target it pops. Now that they’ve slam dunked their sound, I think maybe on future releases, they would be wise to include some rule breaking type tracks alongside their classic constructions. At any rate, not only am I excited about the future of this band, I’m really digging the present.