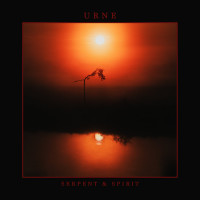 Prog can be a bit of a dirty word, can’t it? for some it can conjure up 12-minute long tracks, meandering somewhat aimlessly without ever truly making much impact, unusual time signatures that make songs difficult to get a grip of and impenetrable concepts that would be impossible to discern without press or liner notes. The reason some people think of prog in this way, is because some prog is exactly like that. And for balance, that’s exactly the sort of listen that some afficionados are looking for. But there is another way.

URNE are, it could be said, a prog metal band from London, UK. It’s probably worth pointing out that they’re also a 3-piece; made up of bassist/vocalist Joe Nally, guitarist Angus Neyra and Richard Harris on drums. This is their debut full-length and spans 8 songs over roughly 54 minutes, so yes, there are some lengthy tracks involved here. The title track and album opener is the best part of 9 minutes and there are a further 3 tracks which tip the scales at over 8 minutes, but then there is also “ENVY THE DEAD” at a brief 2 and a half minutes. But what makes the real difference is the content of the songs. The variety of styles traversed by 3 members and across 8 songs is extraordinary. Just some of the bands that this record puts me in mind of at different times include Mastodon, Black Sabbath, Black Peaks, Guns ‘n’ Roses, Elder, Numenorean and Metallica. There are atmospheric songs with blast beats (“MEMORIAL: SING ME TO REST”), 4/4 stomping metal (“THE PALACE OF DEVILS & WOLVES”), cinematic and emotive solos (“MEMORIAL”), a variety of vocal styles and a seemingly never-ending supply of gargantuan and rhythmically interesting riffs.

So to state the obvious, there’s pretty much something here for everyone. The album even signs off with a flourish on what starts as a lament which travels from sombre, Latin acoustic guitar through foaming-at-the-mouth thrash, to intense, double-time extreme metal to another mesmerising solo and yet at no point do the myriad different segments feel like they’ve been bolted together roughly. Even the more incongruous passages are linked in such a way that it delivers impact without feeling disparate, per se. I think it’s in this, the ambition and breadth of styles that this record fulfils on the promise of prog. It’s progressive in a literal way without having to fall into some of the pitfalls associated with it. The musicianship throughout is exemplary and if I were to go out of my way to find critical fault, then I’d be hard pushed. It could be argued that at times the drums serve as a relatively simplistic backdrop but elsewhere in the record Harris’ work shows without question he’s no slouch. Beyond that, there are the obvious limitations which apply to most 3-piece bands, but I’m not sure that’s so relevant here given the diversity URNE have shown here in their debut.

As you may have deduced from my opening, I have a degree of scepticism around the prog label. But when prog metal is as good as this and truly retains its metal, then I find it hard to argue with the positives. In the right hands, progressive ideas and techniques can be spellbinding. There can be no question that URNE are in possession of those hands.