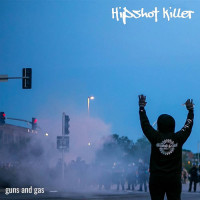 After more than ten years as a band, Hipshot Killer seemed to have settled into a comfortable groove. And it was a good groove. Over the course of three LPs and a single, the Kansas City, MO trio had been purveyors of consistently good midwestern punk. They’ve been churning out melodic, nuanced, well written, often introspective songs. That hasn’t changed.

Still, Guns and Gas feels different. It’s more urgent. More angry. More political. More desperate. While Hipshot Killer haven’t exactly reinvented themselves, they seem to have rediscovered their inspiration. The opening tracks, “I Am Not Alone” and “I Want to Kill You”, are about as intense as anything the band has done. While melody has been one of the band’s defining traits, they’ve always played hard enough to appeal to the old school punk crowd. These two songs flat out rage.

“I Don’t Want to Die” is an acoustic, plainspoken folk song. It’s probably the mellowest song in the band's growing catalog. Hipshot Killer might save the best song for last in the form of the catchy, funny, angry and melodic “Don’t Call Me”. At seven songs and 18 minutes, Guns and Gas is a brisk, but still satisfying listen. The songs work together well as they chronicle the last 18 months of societal upheaval. If you haven’t jumped on the Hipshot Killer bandwagon yet, now is the time.

World/Inferno Friendship Society: A Recollection of Works in Progress