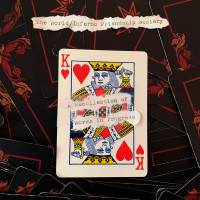 A Recollection of Works in Progress (2019)

World/Inferno Friendship Society was notoriously picky about what they would and would not release. For instance, they once scrapped an entire (darn good) album- google “3 Ring Brain and a Circus Heart.” So, it was a bit of a surprise when they released the demos/rarities collection A recollection of Works in Progress for Hallowmas 2019. Maybe the band was feeling a little nostalgic because, at the time, Inferno co-founders Jack Terricloth and Scott Hollingsworth had finished their excellent All borders Are Porous to cats album, thereby making the circle whole. (Throughout the band’s history, the two ringleaders had butted heads, with Hollingsworth frequently leaving the group).

At any rate, it’s a treasure trove. The A-side is a repress of the bands early ‘90s, first demo, of which only 25 copies were made. That side is a revelation. It’s known that Inferno was formed after the collapse of Sticks and Stones. But whereas Sticks and Stones was post-punk, or maybe even emo at the end, Inferno’s first release, the legendary “Tattoos Fade” 7-inch, was bombastic and explosive and fun. Astoundingly, A-side here bridges the gap. Yes, it does open with a raw and rough version of “Tattoos,” but the second track, “Foolish Things,” is quiet, sensitive, and emotive. Maybe it even was a Sticks and Stones tune that was never recorded.

Yet, despite that, even in the back, there are weird sound effects that open the spacier side of say… Psychic TV… that give the song a weird, alien feel… and that’s a great thing… and it also forecasts the otherworldliness of the Inferno to come. This continues for the rest of the side, more or less. “For Sleep” has a noir bounce, but a weird synth pulses while what might be a sitar skips in the front. It sounds like The Maltese falcon on mars, and more importantly, shows the band forming from the ground up. See also “Subway Song,” which probably was influenced by wilderness years Strummer, and “Slinky Instrumental #3” which bears the tiniest traces of the broad leaps the band would take much later with Addicted to bad Ideas (and it also perhaps more directly forecasts the creepy, night in the woods feeling of Inferno’s debut LP).

The B-side pulls from across the band’s history, but sticks to mostly demos and unreleased tracks from the band’s first few years. The instrumental version of “All of California and everyone who lives there stinks” is solidly in the so-called Gypsy punk style, which the band would shed as that style became played out by less nimble bands with mustachioed frontmen… ahem… The rare song “burn and scar” appears in an even earlier, and sadder, version. “A night in the woods” again is powered by a gypsy/circus punk vibe and bounces so hard it almost goes from oompah to ska. Maybe more importantly, though, it’s one of the first steps were Terricloth decide that the persistent melancholy of Sticks and Stones wasn’t necessarily needed and decided to have fun again. And believe you me, the track is fun.

Now, and at least for a while going forward, everything Inferno is tainted with a certain sadness since Jack was taken from us far too soon. Maybe that will fade in time. Despite that, it’s a boon that this archive exists. It makes the murky rise of Inferno somewhat more clear (though maybe Terricloth would scoff at such a device). But, it also shows how two massively talented New Jersey punk pals formed what might be the greatest band ever, and it also shows them literally working through that process… and it also shows, through demonstration, that friendship isn’t always clean or nice or fun… but it sure can create great things. Conflict can too, and if there’s a better way to describe Inferno, I can’t think of it.