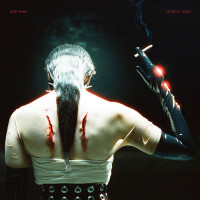 Kristina Esfandiari (AKA King Woman) is someone with a fertile mind. This is evidenced by her prolific output under various pseudonyms including solo projects Dalmation, Miserable and NGHTCRWLR as well as collaboration projects like Sugar High. Her styles are rarely one-dimensional and span rap, doom, rock, shoegaze, electro, noise; and as we’ll come to see, various combinations thereof. The King Woman project, which came into being in 2009 has produced an EP and full-length debut Created In The Image Of Suffering (2017) to this point. The project, (started as a solo project, subsequently becoming a band) also features the talents of Kris’ childhood friend Joseph Raygoza on drums and Peter Arensdorf on guitar/bass. I think it’s important to introduce them at an early stage because the record, though carried to some extent by the charisma, style and vocals of Esfandiari, does feel distinct from a solo project. Almost conversely however, the group feel completely unified in mood and intent from one song to the next.

To frame the sound of this record in other artists is to undersell it, I think. However, in the interest of an initial reference point, if you were on board with the Emma Ruth Rundle and Thou collaboration projects of the last 18 months, then you will want to listen to this. It would also be remiss of me to not point out the occasional similarities between Esfandiari’s style and that of Chelsea Wolfe. Beyond that though, there are shades of the bleak and emotive post-rock of Pijn, the fragile yet empowered honesty of Lingua Ignota and the immediate and satisfying doom riffs of Melvins, all played through an NYC quasi-avant garde filter reminiscent of Yeah Yeah Yeahs.

There is, however, something more to this record than the sum of its influences. Esfandiari has a fascinating sort of elegiac soothsayer approach to delivery across much of the album and when combined with the hypnotic drum and guitar/bass patterns it can transport you to a place of deep contemplation and introspection. But Esfandiari is far from a one-trick pony. She has multiple styles and techniques at her disposal and deploys each of them to devastating effect and with effortless dynamism. When she moves from cupped-hand whispering in your ear to gravel-throated rasps in recent single “Boghz”, the impact is monumental. That particular song is a perfect example of the synergy that exists between the band and Esfandiari that I mentioned earlier. The riffs that explode intermittently feel like they’re made of solid granite. The delicate moments that juxtapose the weightier sections are performed and produced equally immaculately; the bookending passages of “Golgotha” evoke a sepia-tinged, dusty central American bar-room, while “Paradise Lost” is the most sparse and yet one of the most affecting tracks on the whole record.

Esfandiari was raised by her Christian immigrant parents, who often held church at home, performed exorcisms and spoke in tongues. This backdrop combined with revisiting a traumatic, near-death experience she had as a child (following which she experienced several hysterical blackout episodes) resulted in a poem that Esfandiari entitled “Celestial Blues”. After this, she became reacquainted with John Milton’s Paradise Lost (also the name of the album’s closing track) and between these incredibly powerful experiences, the vision for this album was born. It might sound a bit much, but when I listen to this record, consider its ecclesiastical themes and references, the anger, the sense of catharsis, I believe that all those events were indeed necessary to create this record. But that’s not to take anything away from Esfandiari and her ability to manifest those experiences into music the way she has, because this is an astonishing piece of art and one that deserves to be heard by a great many people.

World/Inferno Friendship Society: A Recollection of Works in Progress