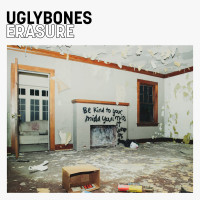 There’s value in crafting long, creative, thought-provoking, dynamic music. There’s also value in unleashing a record that solely aims to get in and out as quickly as possible, obliterating the listener before they knew what happened. Which, because you missed it means you have to go back and revisit, trying to catch how all those hooks kept hitting you straight in the face. And, because it happens so fast, it doesn’t take long to go back, and keep going back. As if it wasn’t obvious, the latest Uglybones record, Erasure, falls firmly into the latter category. What did you expect, a band called Uglybones to release something dripping with shoegaze or post-rock influences, floating and lilting guitars, and ethereal vocals?

Just like implied by the cover art, this won’t be a pretty picture and right from the opener “A Promise” the methodology is laid clear. There’s a bit of a slower stomp before everything unleashes in a sub-minute blast, with guitars a-blazing and screams and shouts a-throat-ruining. Restraint is for the week and this is the kind of music you use to absolutely let everything steam out while losing your shit in an overcrowded, dingy basement. Where hopefully you’re all vaxxed, cause if you don’t end up screaming in someone’s face, they’re probably screaming in yours.

This is the pattern Uglybones plies, the mid-paced stomp versus the annihilating, caustic onslaught of hardcore punk. The title track drops into some tough-guy hardcore feels in the second half, the kind of moment sure to stir up the pit and get everyone shouting along. “Gasoline” does the same, going fast to slow before the closing moments feels like a race to eradicate the listener. “Choke” is less than a minute of unrestrained chaos. And can you have everything feel rapid-fire on one of the longest tracks here? On the two minute long “Growing Season,” once they start Uglybones sure don’t give you many chances to catch your breath. Until things starts to get sludgy and chunky and there's no breathing cause the tone's so dirty and sick. “Night Sun” has the same feels. “Positively” checks all the boxes? Blast beats? Check. Floorpunch? Check. Rapid-fire riffs? Check. This one is made for the live ‘stage.’

The highlight of listening to Uglybones is the bass – not only do the bass lines kick ass, but the mix here really lets them shine. In a song like “Gasoline” they hit hard. “Hoax” and “Positively” are the same, spotlighting the dexterity and drive on the low end. There’s a couple guitar flourishes buried in there, like on “A Promise” but if any instrument stands out here it’s bass.

Is that a traditional song structure I hear on “Cheetah”? With a chorus? Oh, but let’s put some grimy, noisy feedback on there too. Sometimes it feels like Uglybones go the extra distance to make things overly oppressive. “Cheetah” is one opportunity where there could have been another flavor added—you certainly have the space in a two-and-a-half minute song. “Erasure” feels like there was a wonderfully wasted opportunity for a great round of gang vocals. Look, I love records that don’t even stretch twenty minutes and just want to hit you over the head with endless brutality and energy. That’s an automatic check plus in my book. But the things that make bands like Converge so consistently excellent is they know when and how to hold back. When you have that lull, that breath, those moments of melody, the rage and chaos that follow feel even more intense. It’d be cool to see Uglybones add something like that to their repertoire. Until then, I’m just gonna keep enjoying their anarchic storm of hardcore punk in some dreary, dirty DIY space where everyone is going absolutely ballistic.

Various Artists: And Out Come The Lawsuits