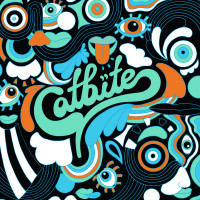 I’m not gonna lie. I was worried about Catbite. The band’s self-titled debut kind of popped out of nowhere and it, more or less, was a perfect debut- the band established a unique sound and kicked it out in a rough-and-tumble manner without much aforethought. It ripped. The problem, then, is how do you follow that up? Do you do the same thing again? (Boring….) Do you do something totally different? (Annoying…) And in line with that, after the release of the debut album, they released a live album and then a country version of the first album and then a hardcore version of that same first album. I will say, that was a daring (and quite funny) artistic and almost combative artistic strike. But, it also gave me pause… was Catbite endlessly warping old material for the yuks… or was it because they didn’t know what to do next?

And then along comes the second proper LP Nice One and it is completely slapping me across the face. Dare I say it’s the perfect type of second album? At its core, this is a ska record tempered with new wave, punk, and power pop leanings. “Asinine Aesthetic” is driven by an early Costello-ish pulse, but has the slash of Specials at their angriest: “If ignorance is bliss then give me a kiss with those razorblade lips…” Likewise, “Call your bluff” is 90s third-wave ska (the good kind) in its purest form. But, where the band’s previous works were a little ragged, and little raw, here the band has enlisted the use of a nice studio and have polished their sound.

That can slice both ways. Sometimes a little polishing buffs out what’s great about a band… and sometimes it wipes away the grime getting in the way. Here, the polish has brightened the band figuratively and literally. These songs all sound sunny, even though a lot of the lyrics are quite dark. But also, there’s a little more spring in the step and controlled striking. When the band hits now, it’s with a specific purpose- check out “Bad Influence” which is a little Susan Cadogan and a little Rancid-esque. While studio sheen can wipe away soul, here, singer Brittany Luna conjures the same deep stomach emotion heard on the those ‘70s stax classics. See also “Stay” which, with guitarist Tim’s distanced guitar, is melancholy and sublime. No doubt, bassist Ben and drummer Chris’ Channel One style groove plays a big part, too.

Yet, the releases most ambitious strike is that it’s more mature.. When bands get mature, that usually means they’re more serious and dreadfully boring. Not so here. “Not Ur Baby” is about telling a lover to get lost, but it’s set to a Upsetters high stepping bounce. “Our time has run out and I can’t be your shoulder to lean on” sounds dreary, but it’s set to a high energy bounce. Never has been getting dumped been so fun. Also, the Selena cover? *(*chef's kiss*)

And that’s what makes this such a powerful second strike. The band always addressed adult topics, but here, they juxtaposing those topics with even sprightlier, even more kicking music, with even tighter song writing. So, sure, the band is more mature, but they’re also a lot more fun.

Various Artists: And Out Come The Lawsuits