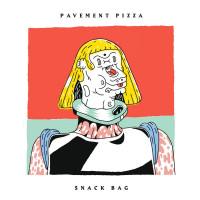 Look, I’m not a pop-punk fan. If it’s not the Queers or (with a guilty conscience) Screeching Weasel, it’s probably going to get a hard pass from me. Even if a band’s in the gray area; you do you, of course, but I’ll sit it out. The other day my wife told me that MxPx is positive nostalgia for her, and I secretly started questioning our joint bank account.

So when I recently came across Snack Bag by a pop-punk band from Warsaw called Pavement Pizza, I had my old man cynicism all geared up and ready to come out. And, while I would put them solidly in the gray area, I was pleasantly surprised. Hey, I may be a grump, but a grump that can’t give credit where due is just an asshole.

Oh sure, in terms of subject there’s plenty of the suburbs, dating, casual drug use, sneakers, and the like. And I don’t mind that; if that’s their truth, then they should speak it. What sets Pavement Pizza apart for me is the style and the structure. For starters, the lead vocalist is much more Kelly Jones than Alex Gaskarth. That everyman raspiness adds something especially rare in pop-punk: soul.

That emotive, almost pained howl sits atop a backline pulling elements from more varied sources than you may expect on a record like this. The post-Britpop similarities don’t end with the Jones comparison. The opening track “Buggin Out” hollers out a dirty-chic vibe reminiscent of the Libertines, while the clap-along beat and disdainful lyrics of “Thunderclap” go full Supergrass. They throw one to the 90’s on “Candy Flip,” which mixes power pop tones with a grunge structure. “No Big Deal” is a more traditional punk rock track, on which the band keeps things fast and simple. The singer displays a juvenile sneer in his voice, while staying on the right side of delinquency vs whining. And though the closing track “Up In the Air” goes the slowest and longest, it luckily avoids slipping into a being a sad little ballad. It’s contemplative, yes, and has a prolonged minimalist interlude, but it still maintains an energy present throughout the set.

Snack Bag is, as the title might imply, a satisfying little package that you’ll surely want to carry around with you for a while. It won’t make a pop-punk convert out of cranky geezers like me, but I don’t think that’s its intention. Pavement Pizza have enough unique qualities on their own.