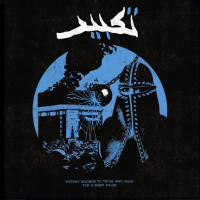 Victory Belongs to Those Who Fight For a Right Cause (2021)

Not much is known about the members of Taqbir, which is an intentional anonymity. Like so many Islam punk bands before, they understand the risks of speaking out against nation, government, customs, and religion. Here stateside, such opinions don’t really garner consequences any more severe than the occasional helicopter mom looking for a scapegoat. But Taqbir come from a world where a “Fuck Society” attitude could put them in actual physical danger. Ponder that the next time you’re drawing the Anarchy symbol on your Starbucks cup.

Not to diminish American rage, or any other rage for that matter. Taqbir clearly looked right here, to the 80’s hardcore scene of the US, as well as of the UK, for Victory Belongs to Those Who Fight For a Right Cause. Likely to have been set to tape in a bedroom or abandoned squat in the band's home of Morocco, the first thing that stands out about this EP is the recording. It’s about as barebones as it gets, the sense of a homemade demo made on a 4-track not lost on anyone who had a dream once. It’s thin, noisy, and raw. In other words, it’s a fucking blast.

With lyrics in the local dialect of Arabic, you might not know what’s being said, but there’s no mistaking the message. The lead vocalist punches through the chaos like a plucky prizefighter, her shouts echoing the war cry of the band name’s origin. Guitars buzz roughly all around her, their temper as boiled over as their leader's. And a surprising twist lies further upstage: electronic drums. Be this a creative choice or one of circumstance, they add a unique dimension to the set of ‘82 hardcore and crust punk. They, along with the singer’s wail, give the effect of if Hanin Elias had tried harder. It’s a furious brute of an EP; one that reminds us in this age of quarantine and isolation, that there’s still plenty of voices to be heard all over the globe.

Gost: Rites of Love and Reverence