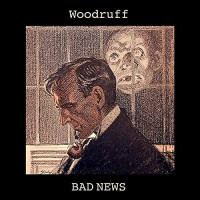 Somewhere on the wavelength between The Rentals and ... oh, let's say Swearin', lays Bad News, the second effort by California power-mopers Woodruff, and the band's second release in 2021. Truly, it's a boom time for a grim disposition and a fuzz pedal.

"Grim" is perhaps too stark a word, but the vibe on Bad News, from the cover art to the lyrical content to down-key downers like "Cut the Line" and “For a Moment" is decidedly a bummer one. That's the point, of course. Woodruff are trafficking in documents of low-impact, high frequency misery; the kind of internal-facing, everyday insults and letdowns that provide the darker colors of an average, non-threatened life. They ply their trade well.

The record holds a post-grunge perspective on its alt-rock structure, sounding in-step major label adjacent indie-rock stylings in-vouge back when Lollapalooza was still a touring concert. What ultimately sells power-pop of this ilk is how well the hooks support the rest of the sadness delivery system, and the group joins a proud legacy of drag-rockers who take their hooks where they can get them. "All Keyed Up" gets it from its salty, pouty chorus ("You won't say anything to me / You don't say anything to me."); "Bad News" gets it from its slightly-swinging bass riff that anchors the verses; "A Rock in My Shoe" gets it from it's so-simple-no-flash guitar lead and it's "la la la" backing vocals.

I'm no BPM expert, but I'd imagine nothing here is outside 75, which is the tempo of a slightly-too-fast golf swing. Such is the intensity that Bad News is content to operate for its eight-song run; not so much “searing” as it is “slow-cooking.” There is a pity party, somewhere in your future, when some minor slight sticks too long in your craw. When that day comes, Woodruff are your soundtrack.