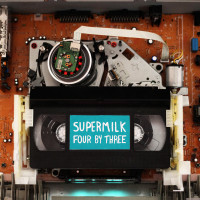 As a music-consuming subculture, we will, at some point, have to critically face the 90s worship / revival among our bands and interrogate why it is embraced in a way that, say, 70s worship is not (band sounds like Guided by Voices = good; band sounds like Led Zeppelin = fuck those guys). However, Supermilk is not the place to have that conversation. Even if the band (I say band, but I mean solo rock project of UK dude Jake Popyura) listed "nineties" in its Bandcamp tags - and to be clear, it does - it wouldn't matter because Four by Three contains some of the catchiest, most mind-destroying moments in rock music of any stripe, full stop.

The first comes on "Fears," which takes the guitar tone from Pinkerton and turns it into a four-minute hook bonanza (if you suddenly find that, upon listening to the choral melody of "I have a fear of the unknown / and that's alright" with all it's guitar leads and laser keyboard wind-ups, that a beer has magically appeared in your hands, fear not, the system is working as it should). The next one will likely come on "Pelican Pete," which will have you singing it's half-nonsense, half-urgent earworm chorus in your sleep ("Pelican Pete, you've gone too far this time / Pelican Pete, you're out of your mind." Uh, totally man. For sure). I know I just name-checked them as part of the problem up in that first paragraph, but there is a GBV quality to these songs; they feel somehow heavily planned, completely tossed-off, written to perfection, not written at all.


This will not be an in-depth discovery about the state of brit-rock or how Supermilk fits within it; a cursory search of Wikipedia shows that Popyura was in the UK rock group Doe for about a decade. If that means something to you then Four by Three may not hold any surprises. For an unwashed yank like me, the record hits as something of a fuzzy sleeper surprise. It's been two weeks since first listen and it keeps revealing itself.


Popyura has an unremarkable but endlessly flexible vocal ability that makes his single voice sound like a true chorus and not just a downpour of overdubs. He has a natural sense for hooks, a natural sense for delivering lyrical nonsense with absolute conviction. If the rest of the instrumentation suffers a bit as a result (compelling guitars in lock-step with the vocal runs, bass that gets the job done, drums that exist), but it all culminates in a singular package that makes the record the kind of work in which each new listen might reveal a new favorite song. It's not hard to tie Supermilk to any number of waves - 90s revival, brit-rock, post-punk. To these ears, it elevates whatever class you'd care to put it in.