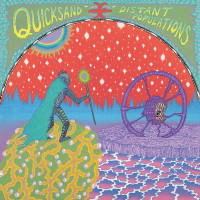 Quicksand sure does look good on paper. Having come up at the start of the 90s out of the New York hardcore scene, they were one of the first to begin thinking stylistically about what comes after hardcore. The undefined, at this time, ‘post-’ played by a bunch of scene luminary types that led the first few waves of hardcore in the 80s were brustling up to greater melodies and musicianship that could not be contained the short, straightforward punk rock of their youth. They had contemporaries in Fugazi, tours with a wide range of alternative bands dominating the 90s mainstream music scene, and released two influential albums still highly regarded, if not publicly recognized as foundational albums that defined post-hardcore.

This is without even looking ahead to their shared band member with the Deftones, a partnership with producer of the moment Will Yip who helmed the boards during their return, and a reunion album on Epitaph Records. And while Quicksand are held up in high regard by many within the scene, they certainly aren’t mentioned in the same breath that a resume like that would normally be articulated in. Not quite as fashionable as Glassjaw. Not quite as notable as a Gorilla Biscuits or Youth of Today. Not quite as mainstream as the Deftones. So with Quicksand’s latest Distant Populations, what does the album bring to 2021 in a contemporary sense?

Quicksand again teamed up with Yip who produced Distant Populations and brings an impeccable ability to bridge the new sounds of punk rock with classic recording quality. Distant Populations provides swirls of alternative, hazy, and thunderous guitars mixed in with the tight grooves of the rhythm section that give the band’s post-hardcore a greater sense of dynamic. Despite the loss of their second guitarist between reunion albums, Quicksand don’t lose their atmospheric heaviness with the smaller lineup.

Third track “Colossus” is a great example of the type of anthemic dissonance Quicksand have fired off their entire career. Walter Schriefels brings in some of the aggressiveness of early Quicksand before allowing the chorus to be the type of release that would seem ripe for rock radio if that still existed. Near the end of the album, “EDMR” also hits this trajectory with a huge bass riff driving the song through reflective choruses as Schriefels sings, “I remember when we were 17 / There was nothing we wouldn’t dare.”

Other standout tracks include opener “Inversion” which sounds like the type of rock Nirvana might’ve made in following up In Utero, lead single “Missile Command,” and “Brushed” which kicks off with an unexpectedly hip-hop flavored drum beat before leaning into the more ambient ambitions of the band. A track like this wouldn’t sound out of place on Incubus’ Morning View. The strength of the highlighted tracks alone make this a more enjoyable and dynamic listen than 2017’s Interiors where a more monotonous track list hindered the album. Unfortunately some of that reappears with Distant Populations. The back to back of “Phase 90” and “The Philosopher” make the middle of the album drag a bit falling back to the more mid-paced territory of Interiors.

Distant Populations is an enjoyable listen and at under 33 minutes, the lowlights don’t stick around too long at any given time. But is an ‘enjoyable listen’ what I’m looking for when listening to Quicksand - a seminal post-hardcore band? In 2021, there’s a lot of post-hardcore out there that surely took influence from Quicksand, but also pushed the boundaries of post-hardcore further and in new directions. Quicksand feels like they are stuck in that middle. Too influential to drastically change, but still too ambitious to just replicate their best parts and call it a day. Distant Populations both benefits and suffers from that dynamic.