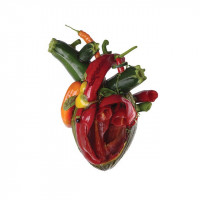 When Carcass described the long-awaited follow up to 2013’s flawless comeback record Surgical Steel as their take on ‘dad rock’ then there were more than a few eyebrows raised. But then those who are most familiar with Carcass also know they have a particular brand of humour, so took this with a pinch of salt. Not least of all, because the idea of Walker, Steer and co. crafting anything that came close to the conventional idea of dad rock was utterly absurd.

And yet there is some truth in what the band said. Torn Arteries was never going to be another Surgical Steel. Carcass are both aware of that and had no interest in trying, I’ll wager. Given that the band have famously shifted significantly from their grind roots to create one of (if not the) greatest melodeath records of all time in Heartwork, it seems unlikely they would stick with a formula and try to emulate their most recent masterpiece. But what Torn Arteries provides that arguably the previous records did not, is a greater sense of fun, believe it or not. Beyond just the wilfully silly song titles (“Eleanor Rigor Mortis”, “Flesh Ripping Torment Limited” and special mention for “Dance of IXTAB (Psychopomp and Circumstance March No.1 in B”) there is an implicit self-awareness in the songs. A wry poking at themselves in style and content. The beauty of the record, however, is how that sense of levity manifests itself in the material.

In short, it comes across likely as Carcass intended, which is to make the listening experience just as fun. All the while though, this remains a Carcass masterclass. Bill’s trademark tone is there throughout, there are more riffs than most bands come up with in a lifetime and because there is undoubtably a step back in pace in comparison to Surgical Steel, there is room for a combination of mid-tempo chugging, stomping and some genuinely emotive solos. Walker’s lyrics are as you would expect from the song titles and Carcass’ lineage. Lots of viscera, onomatopoeic wordplay and delivered with a ferocity that makes it very hard to believe that he’s been doing this with Carcass for over 35 years.

For clarity, the dad rock thing is definitely not accurate in any real sense, but at various moments (such as the solo and hand clap combo in “In God We Trust”), you can see clearly that Carcass are having a great time playing with the idea. The songs do also have more of a spacious feeling to them, which much of Carcass’ work to this point has lacked (by design). It makes the record feel considerably more easy-going than one would normally expect from an extreme metal album. Even when you get black metal style screams from Jeff and full blastbeats in “Under The Scalpel Blade” the song somehow still feels like it’s doing it with a smile on its face, albeit a malevolent one that has been sliced with the eponymous scalpel.

Ironically, this beguiling newfound playfulness is also the record’s main downside. Whereas at their best, Carcass can weave intricate melodies into the most scything and excoriating death metal without sacrificing any of either element, here the band are content for the most part to lean into the more comfortable end of the spectrum. Knowing the power they have at their disposal, I do on occasion find myself longing for Carcass to entirely eviscerate me, but that’s less what they’re trying to do in Torn Arteries; so it’s an artistic choice more than a failing. Also, there is still plenty of savagery and heaviness here to satiate almost anyone. Almost.

So it has arrived. Carcass’ quasi-comeback-after-the-comeback record. It’s a wild ride as it was always going to be, though in a different way than most might have expected but in a way that is quintessentially Carcass. And for that, as well as the joy this collection of songs brings me, I’m very happy to have this record to add to a catalogue already brimming with superb albums.

Various Artists: Purple Toupee: They Might Be Giants Tribute