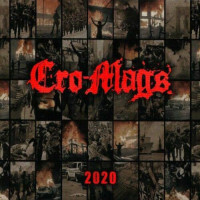 While Cro-Mags might be the standard bearers of NYHC, they actually come from a time before hardcore existed (some of their earliest graphics depict them as skins), and many of the band’s most magical moments come from when that dynamic is activated. Take for instance the title of the lead track from their newest ep 2020- “Age of Quarantine.” Most NYHC are so dreadfully self-serious that, frankly, they drop into self-parody. But, because main Cro-Mag Harley Flanagan comes from a time when punk was cheeky and acerbic, he’s willing to put an amusing twist on even his own legacy.

And that’s the trick. At its core, 2020 is an extension of the fantastic comeback album …In the Beginning. Harley’s pounding bass and barked vocals drive the procession here as the band tears through six mean-swinging tracks. The band slams out tunes that are rooted in New York style hardcore and this crew does it better than anyone- and they do it differently than anyone. Where Harley and crew to just repeat Age of Quarrel over and over and over, the results would be diminishing each time. Instead, they employ the “Bowie method” and keep the core skeleton of their art in tact while morphing exterior. (Perhaps you may think its extreme to compare the artistic mindsets of Cro-Mags to Bowie- and I agree that it is extreme, but I don’t think it’s wrong… also “Life on Earth” / “Life on Mars” hmmmm….). “2020” does indeed have the battering ram attack of classic Cro-Mags, but on the top, Rocky George plays floating, cold guitar lines that remind me of the spacier side of Robert Fripp. “violence and Destruction” is something of a nod to classic Bad Brains as it opens with an extended dub track, but then it drops to a full on assault.

Even more than Beginning, the band is playing around here and putting the “Art” back in punk. That can be dangerous and result in indulgent, or even just boring, music. It doesn’t here. While the band does get trippier sometimes, they are aware that their effectiveness comes from their classic raw power, so that’s along for most of the entire ride. That is to say, there’s tasteful deviation here, instead of grotesque experimentation.

And all of that being said, lyrically the band is honest- as always, mental health/distress is a core topic here, especially in light of the pandemic. A lot of hardcore guys repeat a “I’m tough guy! I’m a tough guy!” mantra and nothing else. Harley’s not afraid to show his scars- and not that it matters, it doesn’t make him seem less “tough”- it makes him seem more real. Ask anyone that’s actually been in a few scraps- their position won’t be “I’ve never been hurt and I’m the toughest guy around!” And to that end, I especially enjoy the more abstract numbers. “Chaos in the streets” walks the line between UK Subs and Black Flag lyrically, but the message seems open ended. “Life on Earth” is more an abstract statement than a particularly thesis, and this open ended lyricism is why Cro-Mags have thrived despite the years and years, and years, and years, and years of conflict. But, all of that seems basically wrapped up now and maybe that’s why the band is thriving and writing some of their hardest hitting tunes ever, right now. Or maybe the conflict was a necessary element to this result. Either way, the brute power and the scars are what makes this era of the band, and this record, so effective.