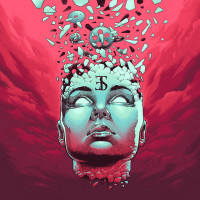 It’s hard to remember a time when the UK heavy scene didn’t feature Employed to Serve. It’s not that they’ve been around for that long (less than 10 years, amazingly) but more that there has always been support for, and influence from, the ETS camp. Rightly so, I might add, as their evolution and rise has been one of the true high points of the UK scene in that time. It’s not been without bumps in the road - the implosion of the record label Justine helped run, most notably - but even that was capitalised on, with Sammy and Justine’s own label Church Road Records giving a home to a number of the bands left orphaned by the collapse (for clarity, there was a mass exodus as a result of allegations made against the label founder). But with the trajectory of their first three records being something along the lines of: cult classic (Greyer Than You Remember), Kerrang Album of the Year (The Warmth of a Dying Sun), then critically-acclaimed and arguably most well-rounded record to date in their last outing, 2019’s Eternal Forward Motion, then this could legitimately be described as a ‘difficult fourth album’.

Given that ETS have broadly been characterised to this point as a hardcore band, the mellifluous arpeggio and strings that welcome you into the record are maybe a little unexpected, but as the record proceeds, it’s clear to see that the band’s comments about altering their sound in the run-up to this release were not simply talk. Although you still have the percussive, syncopated chugging of Sammy’s baritone guitar that punches like a pneumatic drill, there is less hardcore on display here than red-blooded metal. Metalcore can be a dirty word as we all know, but at its core (for want of a better word) and when it was first coined, it did refer to the melding of hardcore and metal which is absolutely what ETS are trading in at this point. But the metal in question is of the burliest, groove-laden kind that swaggers like a plasticine Conor McGregor in a hurricane. “Exist” struts into view after album opener “Universal Chokehold” and feels like it’s designed to kick things off in earnest. Swinging riffs, swaying pinch harmonics, gang vocals, wild solos and lead lines abound. It’s fucking party time.

But alongside their meticulously developed craft for writing bangers, there is still room for changing things up a bit. When “Twist The Blade” kicks off with Sammy’s clean vocal, I did sit up and take notice. This is new territory and it gives an even greater range and new dimension to the band’s sound. Justine still takes lead on vocal duties for the most part however, and sounds as furious as ever, but her lyrics are even more discernible than before, which makes engaging with the themes and narrative a lot easier and frankly, organic. I also want to draw attention to Casey McHale’s drum performance, which is powerful, varied and precise throughout. Given the stylistic shift the band have taken, it makes his contribution even more admirable.

It is true that the main body of the record does exist in the bombastic camp, but with tonal and tempo shifts throughout, it never feels routine or any less urgent. There is just too much songwriting nous on display. The band’s ability to usher in a mountainous chorus or a breakdown that feels like the result of a black hole opening has never been greater. Electronics are used sparingly and effectively, as well. Not something that is strictly new, but for me it feels more seamless than before. Similarly the shades of light that contrast the magnificent weight of this record are relatively scant but serve to add dynamism and a contextual counterpoint perfectly. The arpeggio and clean vocals that album closer “Stand Alone” begins with are a good example and you could initially think that this softer sound may be a bookend for the record, but the song turns into an utter beast by the record’s denouement. They just can’t help but write ragers.

Considering the fact that ETS will be taking these songs to some extremely large stages alongside Gojira in the coming year, then it does feel rather like Conquering might be an incredibly perspicacious title for this record. Difficult record be damned. They’re four for four and they’re coming to crush you.