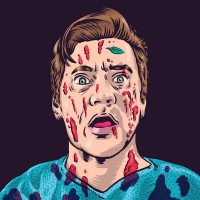 Cards on the table: what I really want to talk about are two specific songs and about the limits of satire. So, in the interest of getting there as quickly as I can, here are the relevant details to understand One Man Show by Nick Lutsko:

Lustko is a commercial songwriter / viral pop madman who has been turning his criminally sharp songcraft to examine the world of alt-right media. He achieved some viral fame back in 2018 by making an achingly beautiful folk song comprised entirely of Alex Jones rants (seek this video out on your own time if for no other reason than to hear the delivery of "literal vampire potbelly goblins are hobbling around coming after us"), and he found an additional muse in 2020 when he started releasing 90-second songs about the larger Trump diaspora ("Boat Parade" is the one I suggest punks seek out) and, uh, Spirit Halloween (haunting the businesses that Jeff Bezos killed!).

That's a rushed summary, but it's good enough. Ultimately, Lutsko has three things working in his favor at any given time: the fact that he is a lethally talented musician and creator of earworm melodies; his penchant for finding dark jokes that work as stand-alone funnies perfectly well without any deeper meaning or observation; the fact that this darkness taps into the main vein of what feels wrong and warped about American political discourse and skepticism.

One more preamble here: This is a five song EP and I'm going to spend most of my time talking about two songs specifically, so here's a rundown of the other three; "LOL or GTFO," which is "the anthem to April Fool's Day" is a fine electro-pop song. "Let's Get The Beatles Back Together (The Beatles Part 2)" is the catchiest and funniest of the bunch, which imagines the two living Beatles joining The Beatles Part 2, which of course is led by Lutsko and will feature only his songs, and he refuses to masturbate with them. Then there is "Let Me Host S&L," which is the most unhinged and the most in line with the larger madness of the extended Lutsko universe, so perhaps the most disposable.

Alright, dang. Now, let's talk about "Joe Biden Wants To Take Your Meat" and "Give Me Tucker's Show."

Musically, "Joe Biden" plays like Contra-era Vampire Weekend sped up to 45 RPMs. It's catchy as all hell, both in its chorus and it's echoing prechorus. On the first level - the primary, sonic level; the "does this song sound good" level, it clears the bar. The second level - the dumb joke level - also works, though it takes a little doing to fully get into the joke. Maybe you recall earlier this year a slight hubbub that Sleepy Joe was going to ration meat sales and outlaw burgers as a play to slow the effects of climate change. As with all things political grist, it was misunderstood and misquoted, but not before getting blown out as a 48-hour talking point. But even if you don't know that, you will recognize the cadence of someone saying something like, "You know, I heard Biden wants to take my meat" the same way you would pause for a moment if someone told you, “I heard Obama is going to buy everyone a cell phone."

So that's your setup. Your punchline is that you must hide your meat in the top of the toilet, you must do so discreetly, or else "greedy meat loving Joe Biden" will find it, and the men in the tunnels will rise up and there will be terror on the streets. That plays right in line with your garden variety “Adult Swim-post-Tim and Eric” chaos, and so it works on that dumb joke level. Where it ascends into a third tier of effective satire is that it speaks to the motivations behind the resistance to perceived political slights - fear. The idea of "men in the tunnels" is dumb, but it also works as a stand-in for whatever your preferred real world conspiratorial motivator is as to the real reason why the government lizard people do what they do, and the real reason why those who oppose them are not nut jobs, but holy soldiers. Because, really, how different are “men in the tunnels” from “pedophiles in the basement of a pizza place” or “an island where the wealthy keep children to feed on them” or “a high-level state operative biblically forecasting a storm?”

At every turn those who are gripped by conspiracy are secure that the more far-fetched the idea, the more insane they may seem to anyone else, the more right they are. The fact that Lutsko can communicate that so cleanly and effectively in less than 90 seconds on a comedy song about hiding meat in a trumpet is a triumph of satire and an economy of joke-telling and cultural diagnosis that is as good as satirist you can think of.

However, there are limits to satire on One Man Show. The other best song on the record is “Give Me Tucker’s Show,” which, on a musical level, is an electro-pop stomper that finds power both in its cavernous chorus and its violin-ass vocal melody. However, this is less a piece of satire than it is a cry for actual help. In this song, Lutsko wants Tucker Carlson’s show because he is unable to locate “Q-Anon” despite it being easily identifiable anywhere an inch below the surface of mainstream political conversation.

A good set up for a joke, but one that Lutsko doesn’t take the bait on. Instead, there is a sense of genuine frustration and disbelief in the lyrics and their their; he finds Q-Anon billboards “10 miles south / from my own house,” he sees them in the attendees of Trump rallies (“turn the cameras around / take a look at the crowd.” He asks for Tucker’s show, but not because of an outsized joke, but because he is genuinely concerned and horrified by the host’s participation – and willful ignorance – of his role in promoting conspiracy and what the real life effects of that conspiracy have had in terms of human capital (“it’s no surprise / that they have real life consequences / people die / and Tucker tries / to paint the insurrectionists as victims”). There are some good barbs in here, to be sure (“I can make more than one face… I’m not a xenophobe”), but “Give Me Tucker’s Show” is less a work of a comedian than it is a work of pure catharsis and exhale, one that suggests even the comedian can only distance themselves so much. Writing all this out, it makes the song sound like a scold, but the more I think about it, the more I think it is the song on One Man Show that will endure, for better or worse.

Signs of the Swarm: Absolvere

The Bollweevils: Liniment and Tonic [7-inch]